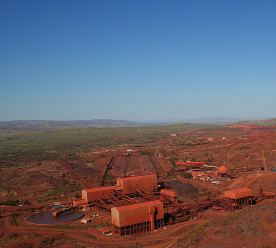 A “wave of legal action” over climate change has begun and cases will become more likely to succeed as the scientists get better at attributing extreme weather events to global warming, activists have warned. Writing in the journal Nature Geoscience, lawyers from ClientEarth in London and Earth & Water Law in Washington DC said events could increasingly land humans with a bill for damages. Companies and their directors, government agencies and others with a duty of care, who fail to disclose relevant information or to plan ahead, could all potentially be in legal trouble. Several legal cases are already underway in the US, including coastal communities in California suing fossil fuel companies over sea-level rise and investigation over claims that ExxonMobil may have misled shareholders about the financial risk posed by climate change. (Independent)

A Brazilian court has suspended a government decree that would open up a vast natural reserve in the Amazon to mining and revised it to prohibit such activity in conservation or indigenous areas, following an outcry from activists and celebrities. The federal judge Rolando Valcir Spanholo said the president went beyond his authority in issuing a decree to abolish Renca, an area of 46,000 sq km that has been protected since 1984, thought to be rich in gold, manganese and other minerals. However the attorney general has appealed, raising fears over the success of the government’s move as higher court judges have previously overturned rulings made by local courts in several similar cases. Environmental activists also noted that 30% of the region was still opened up to mining companies. (Guardian; BBC)

U.S. labour board files complaint against Tesla over worker rights

The U.S. National Labour Relations Board (NLRB) in charge of enforcing labour law has filed a complaint against electric carmaker Tesla, saying it found merit to workers’ complaints about unfair labour practices. According to the complaint, Tesla violated workers’ rights by requiring them to sign a confidentiality agreement that could bar them from talking about their working conditions and safety issues at the company’s facility in Fremont, California. Complaints were filed by three employees and the United Auto Workers union, which has encouraged Tesla employees to unionize. The workers claimed Tesla made them sign a document that they may face termination or criminal prosecution for speaking publicly about anything they observed at work or their working conditions, NLRB said (Reuters)

The mining lobby has called for environmental charities to be banned from using more than 10% of their expenditure on advocacy, as a high-stakes battle over the public voice of charities and NGOs intensifies. A paper released by the Australia Institute on Friday in turn accused the foreign-funded Minerals Council of Australia of spending millions of tax-deductible dollars on political advocacy aimed at reducing its tax liabilities. A Treasury inquiry is considering changes to the rules on which organisations can claim deductible gift recipient status – the latest stage in a long-running campaign by the Coalition government, miners and some media outlets to limit the advocacy activities conducted by environmental NGOs. The report lays out ways in which the foreign-funded mining lobby has exerted political influence, most of which has aimed at reducing the tax revenue collected from those miners. The push to gag environmental groups has been seen as a threat to the whole charity sector by some in the industry. (Guardian)

Coinciding with the World Water Week, Ford’s new sustainability report has revealed progress on water stewardship, such as a reduction in water use by more than 61% and using zero drinkable water in manufacturing. Suppliers who participate in the voluntary ‘Partnership for a Cleaner Environment’ program are also on track to save an estimated 550 million gallons of water over the next five years — or 837 competition-sized swimming pools. The achievements follow Ford’s recent pledge to the Business Alliance for Water and Climate’s “Improve Water Security” initiative, a partnership between the UN Global Compact’s CEO Water Mandate, CDP, SUEZ and the World Business Council for Sustainable Development. Water progress has also allowed saving energy, with a 25% reduction on global facility energy use per vehicle and a 65% reduction in waste sent to landfill globally. (Sustainable Brands)

Image Source: Iron ore mine of Rio Tinto in Western Australia by Bäras at Wikipedia. CC 3.0.