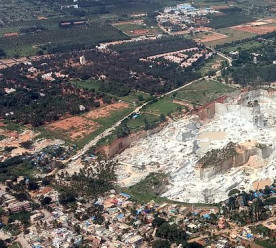 The outsourcing of support service jobs at some of the United States’ most successful companies has fuelled inequality, according to a report by the New York Times. The report compares the careers of two janitors – one who worked at Eastman Kodak’s campus in Rochester in the early 1980s, and one who cleans Apple’s headquarters in Cupertino, California, in the present day. While Kodak’s janitors could take more than four weeks of paid vacation per year, be financially supported to attend college part-time and had the opportunity to transfer to other positions in the company, the situation for many modern-day contractors is nowhere near comparable. One reason for outsourcing is to reduce compensation costs – US firms are legally required to offer the same health insurance and pension plan options to all employees, but not to contractors. (NY Times)

UK retailers John Lewis and Habitat have stopped the sale of granite worktops over concerns of child labour and slavery in their supply chains, after an investigation revealed that debt bondage, underage workers and unsafe, unhealthy working conditions are part of daily working life in Indian quarries. India is the largest global producer of granite, accounting for 49% of the world’s raw stone export in 2015. The report by the India Committee of the Netherlands (ICN) and Stop Child Labour named more than 30 natural stone companies sourcing granite products from the 22 quarries investigated, none of which has a prevention system for child labour. The companies have stopped selling products made from ‘star galaxy’ granite, which an ICN researcher said was “almost impossible” to ensure was free from human rights issues. (Guardian)

A researcher at the high-profile New America think tank, which receives funding from Google, was pushed out after criticising the company. In June, New America scholar Barry Lynn, who ran a team that researched competition policy, posted a statement praising the European Union’s record $2.7 billion fine against Google. Eric Schmidt, executive chairman of Google’s parent company Alphabet, criticised his displeasure to the think tank’s CEO, Anne-Marie Slaughter, according to the New York Times. Several days later, Slaughter let Lynn know that he was no longer welcome at the think tank. She later denied that Google influenced the decision. Some tech lobbyists, think tank officials and scholars argue that Google’s funding of nonprofit groups helps explain why it has avoided damaging regulatory decisions in the US of the sort levied by the EU. (The Hill; NY Times)

Wells Fargo has found an additional 1.4 million sham accounts customers didn’t want, 67% more than it initially estimated, following the examination of internal data dating back to 2009 rather than 2011. The bank revised the total, now up to 3.5 million, after discovering that employees may have been opening unauthorized credit card and bank accounts for customers for far longer than originally acknowledged. The bank acknowledged that instances of unauthorised accounts have been found as far back as 2002, but does not plan to extend its review any further due to the lack or poor quality of the data. Regulators have already fined the bank $185 million after it recognised that employees had used the practice to meet aggressive sales goals and qualify for bonuses. (Washington Post)

Infrastructure consultancy Surbana Jurong has unveiled its Floating Pond, a multi-storey fish farm that could be installed on rooftops, parks or even under viaducts, after four years working on the concept with Singapore fish farm Apollo Aquaculture Group. The vertical farm system could produce several times the amount of fish compared to conventional farming while using less space, an important feature given Singapore’ space constraints and its vibrant fish farming sector. The firm announced it will introduce self-sustainable elements to the prototype, including solar panels and purification systems for rain water and wastewater. While it is unable to say when the concept would be rolled out, Surbana Jurong is planning to introduce this concept in some of the 40 countries in which it works. (Strait Times)