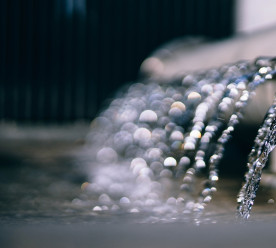 Cities and companies teaming up to tackle urban water crises

Cities and companies are teaming up to invest billions of dollars in water management projects, according to a new CDP report based on voluntarily-disclosed water data provided by 569 cities and 1,432 companies. Around two thirds of cities from London to Los Angeles are working with the private sector to address water and climate change stresses, with 80 cities seeking $9.5 billion of investment for water projects, most of which are in Latin America. However, it also notes that water supply systems of 63% of cities are at high risk. Threats of increasing weather events such as droughts and floods concerned more cities in North America than those in Europe. The study also shows that companies’ water supplies could be exposed to climate risks, with $14 billion of water impacts such as loss of production reported by companies last year. (Eco-Business; edie)

Penelope Gazin and Kate Dwyer, Los Angeles-based founders of the online art marketplace Witchsy, created an imaginary third male co-founder, the aptly-named Keith Mann, to correspond with male developers and designers, following repeated sexist comments and gender discrimination. “It would take me days to get a response, but Keith could not only get a response and a status update, but could also be asked if he wanted anything else or if there was anything else that he needed help with”, explained Dwyer. The co-founders are not the first women to report experiencing sexism in Silicon Valley’s tech scene. Major companies including Google, Uber and Oracle have been embroiled in gender and sexual discrimination scandals in recent months. (Telegraph)

US cities can now see how they performance against international development standards thanks to the first-ever Cities Sustainable Development Goals (SDGs) Index, which ranks the 100 most populous cities based on statistics around issues encapsulated by the SDGs. The index tracks 49 statistical indicators that have been agreed upon by an international meeting of statistical offices for 16 of the 17 global goals. The San Jose-Sunnyvale-Santa Clara metro region, part of California’s Silicon Valley, achieved the highest score of 61.04, followed by Provo-Orem in Utah, Seattle-Tacoma-Bellevue in Washington state. Top-ranked San Jose is also one of three pilot cities, along with Baltimore and New York City, that is working to align municipal policies with the SDGs. Sustainable Development Solutions Network experts hope that this attempt in US cities will offer a model for other countries. (Eco-Business)

UK online gambling firm 888 is to pay a record penalty of £7.8 million after it failed to protect vulnerable customers. The government regulator, the Gambling Commission, said there were “significant flaws” in the firm’s social responsibility processes, including a technical failure which meant 7,000 customers who had chosen to bar themselves from their accounts were still able to gamble. Part of the penalty will be used to repay £3.5 million in deposits made by the customers. Another £4.25 million will be paid to invest in measures to tackle gambling-related harm. Sarah Harrison, chief executive at the Gambling Commission, said that companies need to “go further” and “faster” to identify people at risk. The penalty comes as a report by Gamble Aware identified the key characteristics of problem gambling. (BBC)

Almost half of companies fail on payment security

Nearly half of global companies (45%) have failed to secure their payments systems from hackers, according to a new report by the telecoms group Verizon. They did not comply with the Payment Card Industry (PCI) rules, often failing to scan their systems for vulnerabilities frequently enough and, in some cases, not encrypting data. In the US and Latin America, fewer than half of the companies studied were compliant with the payments security rules. In Asia, more than half of companies are passing. According to the study, retailers and hospitality companies are the worst industries, followed by financial services and IT services. The report comes as companies with a European presence are preparing for the new General Data Protection Regulation, which will impose fines of up to €20 million for not protecting personal information. (Financial Times)*