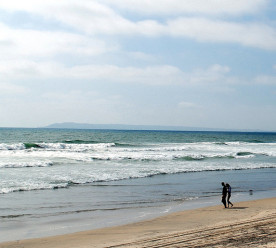 Exxon, Shell and other carbon producers sued for sea level rises in California

Three coastal communities in northern California have launched legal action against 37 oil, gas and coal companies, including Shell, Chevron, Statoil, Exxon, BP and Total, seeking compensation for the current and future costs of adapting to climate change. They claim the fossil fuel companies’ activities have locked in substantial sea level rises, “sought to undermine public support for greenhouse gas regulation” and engaged in a “co-ordinated, multi-front effort to conceal and deny their knowledge of these threats”. However, showing causation between the firms’ activities and specific climate change impacts may be harder to prove. Many campaigners and analysts remain sceptical about the firms’ recent investments in low carbon alternatives. “The bottom line is that these companies are clinging to an outdated business model”, said Kelly Mitchell, climate and energy director for Greenpeace USA. (Guardian; Inside Climate News)

Facebook worker to CEO: challenges are right outside your door

Facebook CEO Mark Zuckerberg is travelling across the US to fulfil his 2017 “personal challenge” to “learn about people’s hopes and challenges”. But cafeteria workers at his company struggle to make ends meet, according to a Guardian investigation. “Is he going to come here?” was the question asked by Nicole and Victor, Facebook cafeteria workers who have been living in a two-car garage with their three children for three years. While they are better paid than the minimum $15/hour for contractors that Facebook established in 2015, the family struggles to afford healthcare and basics such as food and clothes. Last week, the couple were among about 500 Facebook cafeteria workers who elected to join a union. Neither Facebook nor the food service contractor, Flagship Facility Services, opposed the union drive. A spokeswoman for Facebook said none of the company’s contingent or contract workers have access to facilities such as clinics or gyms, but that other policies were a matter between the contractor and the workers. (Guardian)

Investment research firm Morningstar has acquired a 40% stake in environmental, social, and governance (ESG) research and ratings firm Sustainalytics, signalling the growing consolidation in the field. The deal followed a strategic collaboration between the two firms that resulted in the launch of the Morningstar Sustainability Rating in March 2016. The Rating covers more than 35,000 mutual and exchange-traded funds and allows investors to gauge how well companies in the funds are managing ESG issues. CEO of Sustainalytics, Michael Jantzi, said this collaboration “has helped to broaden distribution of [the firm’s] ESG research, allowing Sustainalytics to work with more asset managers and owners to integrate ESG into their investment processes”. (Investment and Pensions Europe)

Scientists from the Royal Belgian Institute of Natural Sciences (RBINS) believe mollusc shells could be used to restore damaged oyster reefs or applied to fields to reduce soil acidity. The seafood industry is responsible for seven million tons of “nuisance waste”, of which shells constitute a considerable portion. Researcher at the RBINS, James Morris, suggests that old oyster shells could be the key to reviving oyster populations by providing a hard surface for oyster larvae to settle on. They can also be used to treat wastewater, make cement and control soil acidity, which Morris says is common practice in Northern Spain, where mussel farming is booming. The concept is promising but will need improved cross-industry collaboration and knowledge exchange. (Sustainable Brands)