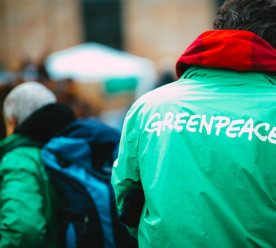 Greenpeace UK has today published a detailed ‘manifesto’ setting out how the UK government could deliver an effective green recovery plan that would help revive the economy from the coronavirus pandemic. Titled A Green Recovery: How We Get There, the report calls for a series of transformative recovery packages that mobilise significant investment in green infrastructure and ensure that radical policy changes transform business and operating models across five priority areas: clean transport, green buildings, smart power, nature, and a circular economy. The publication comes in the wake of a series of media reports and comments from senior ministers suggesting the government wants to place climate action at the heart of a sweeping economic stimulus plan, which is expected to be unveiled next month. The report comes as it emerged that the Prince of Wales is preparing to convene a series of meetings with businesses alongside the World Economic Forum, under the banner the ‘The Great Reset’, which will urge companies and governments to put in place a green recovery. (Business Green)

The global market value of fossil fuels is set to collapse by almost two-thirds, creating heightened economic risk for companies, financial markets and countries failing to embrace new low-carbon technology. That is according to Carbon Tracker, which notes that rising demand for and energy share of renewables has set demand for fossil fuels into rapid decline, which has been compounded by the coronavirus pandemic. The World Bank had valued profits from oil, gas and coal to eventually reach $39trn, but Carbon Tracker has claimed that future profits are set to collapse by nearly two-thirds to $14trn if certain criteria are met. Carbon Tracker notes that the main profit decline would be caused by fossil fuel demand falling 2% a year in line with the needs of the Paris Agreement. Carbon Tracker warns that any oil or gas producers attempting to revert to “business as usual” could be risking in excess of $100trn in potential profits and that businesses, financial markets and nations are facing financial risks by continuing to bank on fossil fuels. (edie)

British-based banks and finance houses have provided more than $2bn (£1.5bn) in financial backing in recent years to Brazilian beef companies which have been linked to Amazon deforestation, according to a joint investigation by the Guardian, Unearthed and the Bureau of Investigative Journalism. As well as providing financial backing for Minerva, Brazil’s second largest beef exporter, and Marfrig, its second largest meat processing company, UK-based financial institutions held tens of millions of dollars worth of shares in JBS, the world’s largest meat company. All three meat companies have been linked to deforestation in their supply chains, though they say they are working to monitor their suppliers and mitigate risks. The European Commission is considering new financial reporting rules in light of the coronavirus crisis that would require banks, insurance firms and listed companies to disclose their exposure to biodiversity loss and pandemic risk. Some of the financial institutions told the Guardian they were engaging with the three companies over deforestation, and could reconsider their support if they saw insufficient progress. (The Guardian)

Snap says it will no longer promote Trump’s account

Snap, which makes the Snapchat app, has stopped promoting the account of President Trump after determining that his public comments off the site could incite violence, in another hardened stance by a social media company against the president. Snap said Mr. Trump’s account would remain intact but would not be promoted on its Discover home page for news and stories. Mr. Trump’s account was previously regularly featured on Discover, along with the accounts of other high-profile users like the celebrity Kim Kardashian, the actor Kevin Hart and Gov. Andrew M. Cuomo of New York. Snap’s move is part of a toughening position by social media companies against Mr. Trump’s posts, which are often aggressive and contain threats and inaccuracies. Over the past week, Twitter has labelled several of the president’s tweets for giving misinformation on voting and glorifying violence. In contrast, Facebook has not touched Mr. Trump’s posts, arguing that they are newsworthy and should remain up in the name of free speech. “We will not amplify voices who incite racial violence and injustice by giving them free promotion on Discover,” Rachel Racusen, a Snap spokeswoman, said. (New York Times)

Senior executives from two major US chicken producers have been indicted for allegedly conspiring to fix prices on broiler chickens, which are sold to grocery stores and restaurants. The indictment marks the first charges to be brought on as part of an ongoing US Justice Department investigation of anti-competitive behaviour in the chicken industry. “Particularly in times of global crisis, the division remains committed to prosecuting crimes intended to raise the prices Americans pay for food,” Makan Delrahim, assistant attorney general for the Department of Justice’s Antitrust Division, said in a statement. The indictment levels charges against the Pilgrim’s Pride CEO, Jayson Penn, and former vice president, Roger Austin. Colorado-based Pilgrim’s Pride (PPC) is the second largest broiler chicken supplier in the country. Also charged were Mikell Fries and Scott Brady, president and vice president of Georgia-based Claxton Poultry Farms. The charge carries a statutory maximum penalty of 10 years in prison and a $1 million fine, though the fine may be increased depending on the loss suffered by victims, according to a statement from the Justice Department. (CNN)