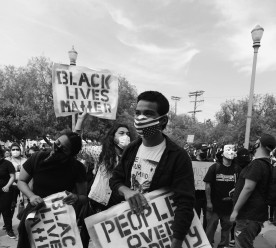 As corporates and brands support the Black Lives Matter movement, some posts have been called out as “hypocritical” on social media, in some cases by former employees who have endured racist abuse. Brands such as L’Oréal and Urban Outfitters have come under fire for creating posts promoting the movement, despite former employees revealing they experienced racism while working for them. The beauty giant L’Oréal wrote a post “in solidarity with the Black community” on its social media channels, sparking a backlash over its treatment of Black model Munroe Bergdorf. Ms Bergdorf was fired by the beauty brand in 2017 for linking racism to oppression perpetuated by white people in a social media post. In another post throwing its weight behind the movement, fashion brand Urban Outfitters announced “racism, injustice, oppression and complacency have never been welcome in our community.” But for former stylist for the brand, Isabelle Landicho-Redman, the post was in poor taste. “I left the company partially due to the treatment I received for whistleblowing,” the stylist based in the UK wrote. (Independent)

Pandora, the world’s largest jewellery maker by volume, announced it will phase out mined silver and gold from its jewellery line by 2025. The Copenhagen-based company said the move to recycled sources will slash the company’s carbon emissions and water usage, given it will allow the company to minimise its reliance on the resource-intensive mining process. According to the company, recycled silver has one third of the carbon emissions of mined silver while recycled gold has emissions 600 times lower than newly mined gold. The company has less than five years to get the percentage of recycled silver and gold used in its jewellery up from 70 percent today to 100 percent. Chief executive Alexander Lacik said the “significant commitment” would allow the company to do its part to build a more circular economy. The new commitments will help the firm, which employs 28,000 people worldwide, move towards its recently announced target to achieve carbon neutrality across its operations by 2025. (Business Green)

The World Benchmarking Alliance (WBA) have launched the draft methodology to accompany their recent scoping report for ‘Social Transformation’, now both open for feedback. The draft methodology sets out the WBA’s proposed framework to assess 2,000 globally influential companies on a set of minimum social expectations. It is based on 15 core-social indicators, as well as minimum expectations that will subsequently impact scores on other ‘transformation benchmarks’ the WBA will create. The consultation offers an opportunity to question the scope and details of the indicators, and the scoring models– areas where the WBA hope to help refine the approach. The WBA is now seeking feedback from a broad range of stakeholders until the 7th September. (World Benchmarking Alliance)

Google in $5bn lawsuit for tracking in ‘private’ mode

Google has been sued in the US over claims it illegally invades the privacy of users by tracking people even when they are browsing in “private mode”. The class action wants at least £4 billion from Google and owner Alphabet. Many internet users assume their search history isn’t being tracked when they view in private mode, but Google says this isn’t the case. The search engine denies this is illegal and says it is upfront about the data it collects in this mode. The proposed class action likely includes “millions” of Google users who since 1 June 2016 browsed the internet in private mode, according to law firm Boies Schiller Flexner who filed the claim on Tuesday in federal court in California. Incognito mode within Google’s Chrome browser gives users the choice to search the internet without their activity being saved to the browser or device. But the websites visited can use tools such as Google Analytics to track usage. (BBC)

Research by the World Resources Institute has found that, in 2019, 38,000 sq km of primary untouched rainforest was destroyed – equivalent to a football pitch of old-growth trees disappearing every six seconds. This made it the third most devastating year for primary forests since the scientists began tracking their decline two decades ago. Primary rainforests are untouched, pristine forests, relatively unaffected by human activities. “We are concerned that the rate of loss is so high despite all the efforts of different countries and companies to reduce deforestation,” lead researcher Mikaela Weisse said. Based on satellite data, Brazil accounted for more than a third of the loss, with the Democratic Republic of Congo and Indonesia a distant second and third, Global Forest Watch noted in its annual report. The total area of tropical forest levelled by fire and bulldozers worldwide last year was in fact three times higher – but primary rainforests are especially precious. Undisturbed by modern development, they harbour the richest diversity of wildlife on earth, and keep huge stores of carbon locked in their woody mass. (The Straits Times)