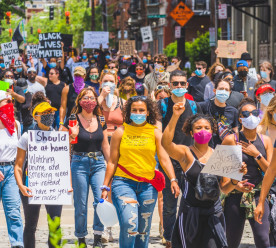 Corporate voices get behind ‘Black Lives Matter’ cause

As tensions flared around the United States after George Floyd’s death under a policeman’s knee companies like Nike, Twitter and Citigroup have aligned themselves with the Black Lives Matter movement. As Netflix posted on Twitter on Saturday: “To be silent is to be complicit. Black lives matter. We have a platform, and we have a duty to our Black members, employees, creators and talent to speak up.” American advertisements often shy away from addressing political issues, like impeachment, and also steer clear of news stories about violence, drugs and, recently, the coronavirus pandemic. But after Mr. Floyd died in Minneapolis, a wide range of companies began to take much more public stances on racial injustice and police violence. Speaking out on social issues is often a calculated decision, a form of “values and identity-driven targeted marketing,” said Americus Reed, a marketing professor at the Wharton School at the University of Pennsylvania. By aligning corporate values with what customers care about, companies are hoping to build a sense of loyalty and a deeper sense of personal connection, he said. (The New York Times)

Fatih Birol, the head of the International Energy Agency (IEA), faced renewed calls to take a bolder stance on climate change on Friday from investors concerned the organisation’s reports enable damaging levels of investment in fossil fuels. In an open letter investor groups said an IEA report on options for green economic recoveries from the coronavirus pandemic, due out in June, should be aligned with the 2015 Paris accord goal of capping the rise in global temperatures at 1.5C. The more than 60 signatories included the Institutional Investors Group on Climate Change, whose members have 30 trillion euros of assets under management, scientists and advocacy group Oil Change International. “Bold, not incremental, action is required,” the letter said. The Paris-based IEA said it appreciated feedback and would bear the letter’s suggestions in mind. It also said it had been recognised for leading calls on governments to put clean energy at the heart of their economic stimulus packages. (Reuters)

The U.S. Treasury Department has released rules guiding how companies use a federal tax credit designed to spur investment in carbon capture and sequestration projects. The rules aim to give investors and developers clearer guidelines for the so-called 45Q tax credit program and ensure that projects are capturing and burying the amount of carbon they are supposed to before they embark on the costly projects. Congress expanded the tax credit in 2018, aiming to lower the cost and risk to private capital of investing in deployment of carbon capture technology in industries ranging from electric generation to fertilizer production. The Intergovernmental Panel on Climate Change said in 2018 that the world needs negative emissions technologies such as CCS and direct air capture to meet goals of the Paris Agreement. The credits are $50 per metric ton of CO2 for projects that sequester carbon and $35 per ton for projects where carbon is captured and then used for recovering oil underground. (Reuters)

Global commodities trader Trafigura is under investigation by US authorities for alleged corruption and market manipulation relating to oil trading. The Commodities and Futures Trading Commission (CFTC) is leading a far-reaching probe into the activities of the oil and metals trading house, including its operations in South America. The Washington-based financial markets regulator has issued subpoenas to a large pool of people, ordering them to hand over all information they hold relating to the company’s activities. The subpoenas demand information going back at least four years relating to “manipulation and corruption involving oil products and trading”. Recipients of the subpoena have been set a strict deadline to hand over documents and data to the CFTC. The investigation is understood to relate to Trafigura’s oil trading division, which is based in Singapore but also has offices in London and Geneva. The US probe comes nearly 18 months after the Guardian revealed that Trafigura had been named in Brazil’s vast “Car Wash” corruption probe, alongside rival commodities traders Glencore and Vitol. It is unclear whether the CFTC’s investigation is related. (The Guardian)

World leaders warn coronavirus could roll back progress for women

The United Nations estimates that the pandemic could cause 7 million unwanted pregnancies over the next six months as women lose access to contraception and reproductive healthcare. Coronavirus is threatening to undo recent gains made toward gender equality as millions of women and girls are predicted to have unwanted pregnancies and fall into poverty, world leaders have said. A “wake-up call” is needed to protect women’s and children’s rights amid the pandemic, said the president of Estonia and former prime minister of New Zealand who held a virtual summit with leaders from Canada, Costa Rica and Senegal and United Nations officials. Child deaths are expected to spike by up to 6,000 per day due to reductions in routine services such as postnatal check-ups and vaccines, which could mark an increase in the under-5 death rate for the first time in decades, according to the UNICEF. As vulnerable members of society, particularly in poorer countries, women are likely to take a big economic hit and have a hard time recovering. (Eco-Business)