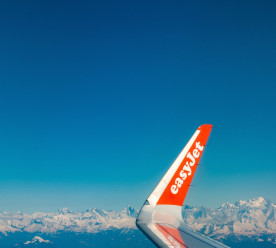 British airline EasyJet has become the first airline to operate net-zero flights, after agreeing to offset all emissions from fuel. The company will also pursue efforts to roll out electric aircraft in the future. EasyJet has reduced the carbon emissions for each kilometre flown by a passenger by 33 percent since 2000, and announced that the carbon offsets are part of an “interim measure” towards decarbonising its flights. Offsets will be delivered through verified projects accredited by the Gold Standard and Voluntary Carbon Standard (VCS), covering forestry schemes, renewables and community projects. Many green groups have criticised the use of offsetting as a means for companies to avoid delivering meaningful action on emissions reductions. However, EasyJet’s chief executive Johan Lundgren has acknowledged that “offsetting is only an interim measure until other technologies become available”. EasyJet is championing carbon capture technologies and sustainable aviation fuels as well as collaborating with Airbus on research for hybrid and electric aircraft. (edie)

The head of the European Investment Bank (EIB) has warned that Europe must step up support for regions hard hit by the costs of going green, as the bloc gears up for a funding battle over its climate change objectives. Werner Hoyer, president of EIB, has said it was “understandable” that Poland, Hungary and Romania voted against a landmark decision for the lender to phase out fossil fuel lending by 2021, as reported last week, saying they would be hardest hit by the move. He stated that the EIB and Brussels would need to provide support to countries and regions that were heavily dependent on the coal industry. The EU is aiming to become the first climate neutral major economy in the world by 2050. The European Commission has estimated it will cost €300 billion to fund the economic transition to reach the target, with the bulk of spending needed in higher-polluting countries in central and eastern Europe. (Financial Times*)

The World Business Council for Sustainable Development (WBCSD) has launched a new programme to help women reach senior positions in companies and lead on embedding sustainability across entire corporate strategies. The programme, entitled ‘LEAP’, encourages companies to propose a female manager and a mentor positioned at the board or executive level of the organisation. The WBCSD claimed that the mentorship programme aligns with its work to build towards Sustainable Development Goal 5, to achieve gender equality and empower all women and girls. The Better Business, Better World report, launched by the Business & Sustainable Development Commission in January 2017, found that achieving SDG5 and gender parity could unlock up to $28 trillion by 2030. Currently, female staff account for more than half of employees in CSR professions globally. However, the trend is accounted for more by stand-alone consultants and low-paid interns than C-suite executives, with women filling just 29 percent of board-level seats globally. (edie)

Contractors and other flexible workers should enjoy a higher minimum wage than those with secure employment, the Demos think tank has urged. The report, funded by UK bank NatWest, stated that a higher rate would insulate workers from some of the risk they face as a result of unsecure earnings. It also suggested that banks or trade unions could administer benefits such as holiday pay, noting that having another body rather than government oversee employment benefits would be similar to the so-called Ghent system, named after the Belgian city where the idea was piloted. Author Ben Glover stated that “self-employed workers are not protected by the safety net that many of us take for granted, from sick pay to maternity cover”. Other recommendations include training from the government and banks on managing finances when being self-employed, and automatic pension contributions. (BBC)

Clothes, shoes, and accessories are the fourth largest cause of environmental pressures in the EU, according to new research released by the European Environment Agency (EEA), with only food, transport and housing logging a greater environmental impact. In its briefing the EEA stated that “textile production and consumption cause significant environmental, climate and social impacts by using resources, water, land and chemicals and emitting greenhouse gases and pollutants”. The research stressed that the majority of the environmental impact of the EU’s textile consumption is exported to other parts of the world. About 85 percent of raw materials and 92 percent of the water were used in other regions of the world, while 75 percent of emissions associated with EU textile products were generated outside the EU. According to the EEA, the problem can only be solved with the “wide-scale implementation” of circular business models, backed by government intervention to drive use of recycled materials, greener production and better recycling facilities. (Business Green)