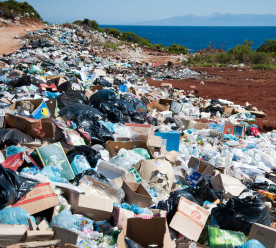 In its first-ever climate risk assessment, the Bank of England has revealed that parts of its investment portfolio currently support up to 3.5C of global warming by the end of the century -a rise in average temperatures well above the 2C upper limit goal of the Paris Agreement. The report shows the Bank of England has cut emissions from its own activities – which include printing banknotes, building and business travel – by a third since 2016. However, it also reveals that the bank continues to finance carbon-intensive activities that undermine the climate goals agreed by world leaders at the landmark 2015 UN climate summit in Paris. Andrew Bailey, the bank’s governor, conceded that there “remains a gap between the associated carbon outputs” of the Bank of England’s holdings and the Paris goals. The discrepancy, he conceded, “demonstrates the additional work needed to meet the UK’s goal of net-zero emissions by 2050”.  (Business Green)

A new study conducted by nonprofit As you Sow demonstrates that many big companies are generally failing to take ambitious action on plastic pollution, despite lofty pledges to do so. In total, 15 firms scored an overall ‘F’ grade, including food chains Papa John’s, Domino’s Pizza, Tyson Foods, and Whole Foods. A further 22 firms scored a ‘D’ grade overall, including giants Kraft Heinz, Kimberly-Clark, Kellogg, PepsiCo, Heineken, Mondelez International, Burger King, and Yum! Brands, which owns KFC, Pizza Hut and Taco Bell. At the other end of the rankings, Unilever received the highest overall company grade of the cohort. In a bid to change the trends it reveals, the As You Sow report contains a string of recommended actions for businesses in each of the six key areas. It states that companies should view 100 per cent recyclability, reuse or composting goals as a “first step”, given systematic challenges to recycling infrastructure and the overarching need to produce less virgin material in the first instance. (Edie)

A study has revealed that a proposed coal power project in Indonesia, Jawa 9 and 10, would be unprofitable for its investors amid mounting pressure on governments and companies to drop coal. The 2,000-megawatt Jawa 9 & 10 coal-fired power project planned to be built near the Indonesian capital city Jakarta would result in significant losses for investors if it goes through, a new pre-feasibility study released on Thursday (18 June) has revealed. The analysis conducted by Korea Development Institute (KDI), an autonomous policy-oriented research organisation, shows the present value of cash flows pumped into the power project would exceed that of inbound cash flows by US$43.58 million over the station’s lifetime. The project, which is to add two power plant units to the Suralaya coal-fired power station in Cilegon, a city in Indonesia’s Banten province, is expected to be in operation from 2024. Around the globe, pressure is mounting on governments and companies to drop coal, the world’s single biggest contributor to climate change. (Eco-Business)

Carmaker Tesla has set a new target to implement cobalt-free batteries in all its electric vehicles. The new aim does not yet have a deadline or an accompanying time-bound roadmap. However, Tesla said the first cobalt-free batteries will be added to models produced in China and sold on the Chinese domestic market. Almost two-thirds of the world’s cobalt is currently sourced from the Congo and, as such, is classed as a conflict material. Anticipating an uptick in the volume of production and battery materials returned in the coming years, Tesla says it is developing a “unique battery recycling system” capable of dealing with manufacturing scrap and end-of-life batteries alike. Recent research from the University of Birmingham concludes that the development and industrialisation of EV battery recycling technologies is currently being outpaced by EV uptake, paving the way for a “huge waste management problem”. The system adopted by Tesla, will “maximise” the recovery of “high-value” or “critical” materials, while also capturing lower-value elements. (Edie)

Toy maker Hasbro has become the latest major brand to partner with waste supplier TerraCycle to offer a free, UK-wide recycling programme for its products. The scheme will see old Hasbro toys, action figures, dolls and board games collected by Terracycle in the UK and transformed into materials used to make new products, including outdoor furniture and planters. Hasbro, which owns a raft of household toy brands including My Little Pony, Monopoly, Sesame Street and Playdoh, explained that customers across the UK will be able to drop off their old toys at a number of public drop-off locations. The partnership builds on a suite of sustainability initiatives from the toy giant, which began a staged phase-out of plastic from its product packaging this year in pursuit of its goal to eliminate “virtually all plastic” from new products by 2022. The firm also began manufacturing toys using plant-based ‘bioPET’ in 2018. (Business Green)

Image source: Garbage near forest by Antoine Giret on Unsplash