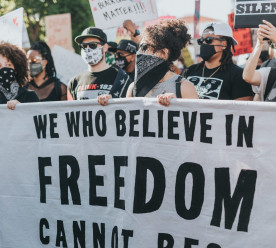 Companies give employees the day off to celebrate Juneteenth

This year, more than a dozen companies are, for the first time, giving employees a paid day off from work to observe Juneteenth, the oldest known holiday honouring the end of slavery in the United States. Last week, Nike, Twitter, and a handful of other companies said they would observe June 19, or Juneteenth, as a paid holiday. Since then, various others have followed their lead. “This Friday, June 19, I ask that you take the day to honour the historic pain caused by — and lives lost to — racial inequity and celebrate racial diversity,” JCPenney CEO Jill Soltau said in a message to employees. “This is an opportunity to continue to learn, connect with each other, and reflect on how we can move forward and achieve permanent and lasting change.” (The Wall Street Journal)

Multinational consumer products company Colgate-Palmolive is reviewing its Chinese toothpaste brand Darlie as firms reassess race stereotypes in products. The name of the popular toothpaste brand translates as “black person toothpaste” and features a caricature of a man with blackface make-up as part of its branding. It is owned by Colgate and its joint venture partner Hawley & Hazel and sold widely across Asia. The toothpaste brand was originally called “Darkie” before it was changed to Darlie in 1989, following pressure from shareholders and other groups. Despite the name change, the blackface logo remained. “For more than 35 years, we have been working together to evolve the brand, including substantial changes to the name, logo and packaging. We are currently working with our partner to review and further evolve all aspects of the brand, including the brand name,” a Colgate spokesman told the BBC. A string of high-profile brands are also reviewing names and logos in light of the racism debate in the US. (BBC)

Businesses urged to give refugees more jobs in Covid-19 era

Governments and businesses must do more to integrate refugees into the economy and stop them falling through the cracks during the coronavirus pandemic, a top United Nations official said on Thursday. Refugees are one group that were first to feel the economic impact of the pandemic because they often work in the informal economy. The pandemic has also increased xenophobia and discrimination and led to a big rise in evictions, the UNHCR’s Gillian Triggs told an online discussion hosted by the Thomson Reuters Foundation on challenges facing refugees in the Covid-19 era. Gideon Maltz, executive director of the Tent Partnership for Refugees comprising more than 100 major companies, said some businesses were already taking action to help refugees. “Businesses have a vital role to play,” said Maltz. “There’s a huge opportunity for all of them to step up.” (Eco Business)

Farfetch’s new tool to highlight the environmental impact of clothing

Luxury fashion platform Farfetch has launched a new tool helping online customers to choose products with lower environmental impacts, including second-hand goods and those made using innovative renewable materials. Called “fashion footprint”, the tool does not label the carbon, waste or water footprints of each individual product – rather, it provides an overview of whether the materials and processes used to produce garments, shoes and accessories are low-impact. The tool, when used on pre-owned items, will also tell users about the negative environmental impacts they will mitigate in comparison to buying now, in general terms. Farfertch’s chief commercial and sustainability officer, Giorgio Belloli, said the business is hoping to become a “source for data and tools in the circular space”, as well as an online retail platform. As such, the results of the research have been made publicly available. (Edie)

Ride-hailing company Lyft has announced that all drivers on its ride-hailing platform will need to shift over to electric vehicles within the next decade, as it became the latest major company to join the global EV100 initiative. While the upfront cost of EVs today remains higher than for traditional fossil fuel cars, Lyft said that with battery costs continuing to decline it expected zero emission models to be more economical for rideshare drivers than petrol and diesel vehicles by the mid-2020s. “By working with drivers to electrify an estimated more than two million vehicles over the next ten years, Lyft is not only sending a clear signal to policy makers and manufacturers, but will also allow millions of passengers and drivers the chance to experience the benefits of clean transport,” said Helen Clarkson, CEO of green business NGO The Climate Group. (Business Green)

Photo by Nathan Dumlao on Unsplash