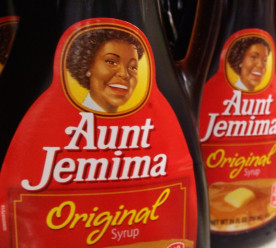 American food brands Aunt Jemima, Uncle Ben and Mrs Butterworth are being forced to rethink their branding in wake of protests of racial injustice and greater consumer scrutiny over racial stereotypes. Within hours of an announcement from PepsiCo that it was ditching its Aunt Jemima baking ingredients label, Mars said it was reviewing the Uncle Ben’s trademark and Conagra Brands said it was evaluating the future of the Mrs Butterworth’s packaging for syrups and pancake mixes. The swift succession of pledges demonstrate the intensifying pressure on global companies to re-evaluate products and symbols as the Black Lives Matter movement gathers momentum. In a statement on Wednesday, Kristin Kroepfl, chief marketing officer of PepsiCo’s Quaker Foods North America division, said while “We recognise Aunt Jemima’s origins are based on a racial stereotype.” The company has yet to unveil the new name for the range. (Financial Times)

The world has only six months in which to change the course of the climate crisis and prevent a post-lockdown rebound in greenhouse gas emissions that would overwhelm efforts to stave off climate catastrophe, one of the world’s foremost energy experts has warned. “This year is the last time we have, if we are not to see a carbon rebound,” said Fatih Birol, executive director of the International Energy Agency (IEA). Governments are planning to spend $9tn (£7.2tn) globally in the next few months on rescuing their economies from the coronavirus crisis, the IEA has calculated. Carbon dioxide emissions plunged by a global average of 17% in April, compared with last year, but have since surged again to within about 5% of last year’s levels. Fatih Birol says “if we do not [take action] we will surely see a rebound in emissions. If emissions rebound, it is very difficult to see how they will be brought down in future. This is why we are urging governments to have sustainable recovery packages.” (The Guardian)

The United States Justice Department has released recommendations on to pare back the legal shield for online platforms that has been crucial to their growth since the earliest days of the internet, taking a direct shot at companies like Facebook, Twitter and YouTube that have come into the cross hairs of the Trump administration. The changes to the law would put the onus on social media and other online platforms to more strongly police harmful content and conduct while also being consistent about their moderation. Internet companies say they are already liable to some degree for criminal content and a reinterpretation of the 1996 legislation would constrain their ability to moderate harmful and problematic third-party content without fear of more liability. “This is a coordinated attack by the administration against tech businesses to sidestep the First Amendment,” said Carl Szabo, vice president of the tech lobbying organization NetChoice. (New York Times)

Logitech to roll out carbon labelling

Electronics giant Logitech is set to introduce labels communicating the carbon footprint of products to its entire portfolio, starting this year. The firm said that the move will help customers to make informed buying choices and learn more about the environmental impact of their products. In order to develop the labels, Logitech has collaborated with Natural Capital Partners, iPoint Group and DEKRA to develop a robust life cycle analysis process which takes into account the entirety of life-cycle emissions, from raw materials to consumer use and end-of-life. Logitech will share its life cycle analysis methodology and design learnings with other businesses across the electronics sector and beyond. “We recognize the scale of the environmental challenges facing our planet today,” Logitech’s chief executive Bracken Darrell said. “We are doubling down on our efforts to reduce our environmental impact, yet we can’t do it alone… It will take an industry-wide effort to truly make a difference.”(Edie)

Construction is beginning on the world’s largest liquid air battery, which will store renewable electricity and reduce carbon emissions from fossil-fuel power plants. The project near Manchester, UK, will use spare green energy to compress air into a liquid and store it. When demand is higher, the liquid air is released back into a gas, powering a turbine that puts the green energy back into the grid. A big expansion of wind and solar energy is vital to tackle the climate emergency, but they are not always available. Storage is therefore key and the new project will be the largest in the world outside of pumped hydro schemes, which require a mountain reservoir to store water. The new liquid air battery, being developed by Highview Power, is due to be operational in 2022 and will be able to power up to 200,000 homes for five hours, and store power for many weeks. (The Guardian)