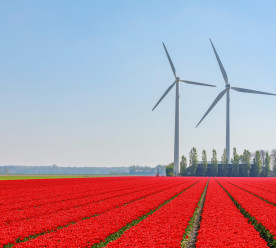 Investors and institutions call for green recovery from Covid-19 pandemic

More than 100 investors have written to European business and finance leaders, calling on them to ensure the delivery of the EU Green Deal. A letter from 109 investors has been sent to leaders and decision-makers across the European Union demanding a green recovery from the Covid-19 pandemic. The investors represent €11.9 trillion in assets under management or advice. The letter has been coordinated by the Institutional Investors Group on Climate Change (IIGCC) in coordination with Principles for Responsible Investment (PRI) and CDP. In similar news, a set of green policy demands have been released to mark World Environment Day by a host of influential institutions, including the OECD and the UN Development Programme (UNDP). The 12 organisations which make up the Partners for Inclusive Green Economy have identified 10 core principles they argue should inform national and international recovery efforts, with a strong focus on tackling climate change, biodiversity loss, sustainable development, and inequalities. (edie, Business Green)

Almost 100 firms, cities and states have now pledged to decarbonise their buildings by 2030

Almost 100 companies, states, and organisations have now committed to ensuring their buildings emit zero carbon emissions by 2030 or sooner, with the number signed up to the pledge near doubling since last year, the World Green Building Council (WGBC) has announced. Launched in 2018, the Net Zero Carbon Buildings Commitment has now attracted 95 signatories, with the actions they have pledged through the initiative expected to reduce CO2 emissions by 3.3 million tonnes, estimates the WGBC, which is spearheading the initiative. New signatories over the past 12 months – who include Filipino developer Arthaland, residential developer Joseoph Homes, Finish retail developer Citycon, Finnish pension insurer Varma, and healthcare and real estate investment trust Assura – have pledged that all the buildings they own, occupy or develop will operate at net zero carbon emissions by 2030 or earlier. Additionally, 28 cities, six states, and one region have signed the Commitment, which WGBC said “signalled a shift in political will towards net zero policy”. (Business Green)

The first stages of a South Korean government “Green New Deal” aiming to retool one of the world’s most fossil fuel-reliant economies is focused instead on protecting jobs as the country seeks to stimulate a virus-ravaged economy, activists say. First proposed by President Moon Jae-in’s ruling party ahead of the April parliamentary election, the Green New Deal sets ambitious goals of net-zero emissions by 2050, an end to financing of overseas coal plants and the introduction of a carbon tax. But activists say that government plans announced since then do not directly address Moon’s pledge to reach net-zero emissions, or to end to coal financing. An initial parliamentary proposal calls for an investment of 12.9 trillion Korean Won ($10.5 billion) over the next two years, with the focus on the creation of 133,000 jobs. The plan includes remodelling public buildings, creating urban forests, recycling, establishing a foundation for new and renewable energy, and creating low-carbon energy industrial complexes to reduce reliance on fossil fuels. (Reuters)

Bank Natwest has updated a carbon calculator that helps staff cut their carbon footprint to reflect the coronavirus shutdown’s impact on working patterns, with advice on commuting swapped for tips on managing home energy usage. The bank revealed it had updated a tool launched earlier this year that offers guidance to staff on how to reduce their personal carbon footprint so that it reflects the fact that the majority of staff are now working remotely. The new calculator, reissued on World Environment Day, provides staff with tips on how they can save energy at home, for example by switching to LED lightbulbs, investing in home insulation, and changing how they use and charge electric devices. It also provides advice on how staff can cut the carbon intensity of their consumption of food by cutting food waste and buying local produce. The bank confirmed it expects the majority of its 50,000-strong workforce to work from home “until at least the end of September” due to the pandemic. (Business Green)

Ethical fashion campaigner Livia Firth says the coronavirus has sounded the alarm in the fashion industry that sweeping change is needed on its consequential environmental impacts. “The fashion industry has been talking for years about the need to change,” she told The Independent. “There have been conferences, panels, people talk and talk, and nothing happens. Now, with the pandemic, it’s not should it change, it has to change…The pandemic has highlighted that sustainability is the only way forward.” The industry is responsible for nearly 20 percent of global waste water and about ten percent of the world’s carbon emissions, the UN reported. There are also well-documented examples of brands sending “dead stock” up in smoke. In recent years, Ms Firth has emerged as a champion of sustainable fashion and a vocal critic of the apparel industry’s failure to protect vulnerable workers in developing countries and its impacts on climate and biodiversity. (The Independent)