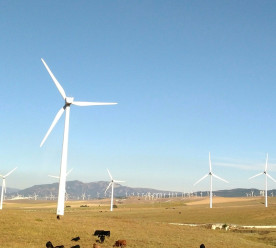 Renewable energy is poised to eclipse coal in U.S. for first time

The United States is on track to produce more electricity this year from renewable power than from coal for the first time on record, new government projections show. The transformation has been partly driven by the coronavirus pandemic and comes despite the Trump administration’s three-year push to try to revive the ailing industry by weakening pollution rules on coal-burning power plants. Those efforts, however, failed to halt the powerful economic forces that have led electric utilities to retire hundreds of aging coal plants since 2010 and run their remaining plants less frequently. The cost of building large wind farms has declined more than 40 percent in that time, while solar costs have dropped more than 80 percent. And the price of natural gas, a cleaner-burning alternative to coal, has fallen to historic lows as a result of the fracking boom. A decade ago, coal provided nearly half the nation’s electricity.  (New York Times)

Fidelity Investments, Vanguard and JPMorgan Asset Management have been accused of paying lip service to human rights in a report that claims few of the world’s biggest fund houses are taking action to mitigate abuses such as modern slavery at the companies they invest in. The report was published as asset managers come under increasing pressure to pay attention to social issues following the coronavirus pandemic. According to ShareAction, a responsible investment charity, three-quarters of the world’s largest asset managers make reference to human rights issues in their environmental, social and governance policies. Few, however, are taking meaningful steps to tackle these issues through their votes at annual meetings, exclusions, discussions with companies or adherence to international frameworks. Almost half of asset managers examined, with a combined $45 trillion in assets, do not ban investments in controversial weapons, while 84 percent of asset managers have no public policy against purchasing sovereign bonds from countries under international sanction for human rights abuses. (Financial Times)*

The welfare of millions of cattle, sheep and goats exported from the EU is being put at risk by various systemic failings including heat stress, bad planning and a lack of information from the destination country, a new European commission report has found. The issue of poor planning for high temperatures has been raised repeatedly by campaigners. In summer, the report said, animals “in many vehicles arriving to ports” must sometimes “endure temperatures of over 35C”. Further, the report criticised the way that, as one campaigner put it, animals “disappear’” at their destination. It noted that most EU countries “do not receive any feedback” from the country of destination about the condition of the animals on arrival. Nor do they get any information, “from the transporter, ship’s Master or vessel operator”. Also singled out were poor contingency planning, incomplete or incorrect departure documentation, and an inability to prevent recurring compliance problems. (The Guardian)

A mental illness crisis is looming as millions of people worldwide are forced into isolation, poverty and anxiety by the pandemic of COVID-19, United Nations (UN) health experts have said. Presenting a UN report and policy guidance on COVID-19 and mental health, Devora Kestel, director of the World Health Organization’s (WHO) mental health department, said an upsurge in the number and severity of mental illnesses is likely, and governments should put the issue “front and centre” of their responses. “The isolation, the fear, the uncertainty, the economic turmoil – they all cause or could cause psychological distress,” said Kestel. The report highlighted several regions and sections of societies as vulnerable to mental distress – including children and young people isolated from friends and school, healthcare workers who are seeing thousands of patients infected with and dying from the new coronavirus. (Reuters)

A major cross-sector research initiative launched by the Carbon Trust is to investigate the ways a flexible energy system could advance the UK’s transition towards net zero emissions. The project will use modelling, research, and stakeholder interviews to identify how different sources of flexibility services across the heat, power, and transportation sectors could reduce overall system costs for consumers. The Carbon Trust will lead the consortium, which includes distribution network operators, energy companies, professional institutions, and city governments, while Imperial College London will manage the project’s modelling work. Conclusions expected for early 2021 aim to help policymakers and energy stakeholders carve out effective net zero road maps, the Carbon Trust said. Previous Carbon Trust and Imperial College research concluded that a better-connected, more flexible energy system could save British energy consumers as much as £40 billion by mid-century. The consortium includes Scottish & Southern Electricity Networks, EDF Energy, Bryt Energy, the Greater London Authority, UK Power Networks, and the Institution of Gas Engineers & Managers. (Business Green)