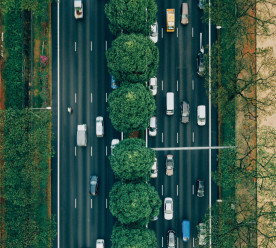 Tech giant Apple has said it would release data that could help inform public health authorities on whether people are driving less during lockdown orders to slow the spread of the new coronavirus. The data is gathered by counting the number of routing requests from Apple Maps, which is installed on all iPhones, and comparing it with past usage to detect changes in the volume of people driving, walking or taking public transit around the world, Apple said. The information is being updated daily and compared with a date in mid-January, before most U.S. lockdown measures were in place. More than 90 percent of Americans are under stay-at-home orders and various lockdowns are underway in other countries around the globe. The information, available on a public website here will show changes for major cities and 63 countries or regions. (Reuters)

Amazon has been ordered to limit distributions in France to essentials items only as the U.S. online retail giant faces claims it is not doing enough to protect its staff in warehouses amid the coronavirus. A court in Nanterre, near Paris, ruled that from April 15 only food, medical and hygiene products could be delivered to customers for a one-month period, while Amazon assesses if it is taking enough precautions to protect staff. The e-commerce company will have to work with employee representatives for the health evaluation. The court said Amazon’s French arm had “failed to recognize its obligations regarding the security and health of its workers.” The injunction has to be carried out within 24 hours of the court’s ruling on April 14, or it will face a fine of $1.1 million per day. But Amazon France said it had implemented daily temperature checks, two-meter social distancing measures between workers and that it had tripled its maintenance and cleaning staff. (Forbes)

Commercial creditors owed money by poor countries should only be eligible for government Covid-19 bailout cash if they agree to sign up to a comprehensive global debt deal, the head of one of the world’s leading charities has said. Despite signs that the G20 group of developed and developing nations are edging towards an agreement on help for the most vulnerable nations, Inger Ashing, chief executive of Save the Children International said the plan would only be fully effective if it included the private sector. Ashing said in an open letter to the G20 that commercial creditors, such as banks, commodity traders and asset management firms, accounted for almost half the $62 billion debt payments due to be made by the world’s 75 lowest-income countries in 2020. G20 governments are expected to suspend debt payments for six months, but Ashing said this did not go far enough. Allowing commercial creditors an exemption from any debt-relief initiative would be the “financial equivalent of pouring water into a bucket with large holes”, he said. (The Guardian)

Major food companies in Asia must improve the welfare of farm animals that they produce, supply or use, an annual benchmark of 150 of the world’s largest food companies has shown. Out of 17 Asian companies in the benchmark, 15 emerged in the bottom tier for being virtually silent on how they are managing the risks and opportunities associated with farm animal welfare. The 15 Asian companies—which made up half of the bottom tier—included China’s top pig and poultry producer Wens Foodstuff, feed and meat manufacturer and distributor New Hope Liuhe, retailer China Resources Vanguard and Japanese food producers Meiji Holdings and Maruha Nichiro. The Business Benchmark on Farm Animal Welfare (BBFAW) 2019, released earlier this month, comes at a time when the Covid-19 pandemic is highlighting the fragility of global food supply chains and the need to do more to stop the spread of diseases from animals to humans. (Eco-Business)

The Committee on Climate Change (CCC) is to present advice to the British government on supporting a resilient, low carbon economic recovery from the coronavirus crisis as part of its annual assessment of the UK’s progress towards its 2050 net zero greenhouse gas emissions goal this summer. The UK’s climate advisory body confirmed that it would consider the impact of the pandemic on the UK’s climate goals, as it unveiled its revised work programme for 2020 in response to the disruption caused by the health crisis and subsequent national lockdown. The CCC said it would be writing to ministers “in the coming weeks” to set out its initial advice on ensuring that economic rebuilding efforts support a “just transition” towards net zero emissions, while also strengthening the UK’s preparedness for the escalating impacts of climate change. The move comes amid growing calls across Europe for Covid-19 recovery efforts to focus on delivering the EU’s proposed 2050 net zero goal, with a coalition of CEOs, politicians, NGOs and trade unions this week calling for a green investment programme to spur the bloc’s economic recovery. (Business Green)

Image Source: aerial photography of road with cars by chuttersnap on Unsplash.