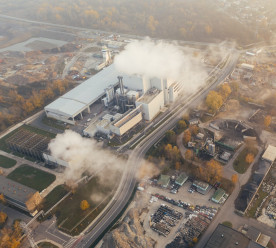 The first new medical ventilator to treat people with severe symptoms of Covid-19 has been approved in the UK following a collaboration of engineering businesses. Firms including manufacturing giant Siemens, aerospace corporation Airbus, car producer Ford and a number of Formula 1 teams worked with Penlon, a medical device maker, to adapt its ventilator so that it could be mass-produced at speed. Hundreds of the Penlon Prima ESO2 model ventilator are expected to be built for hospitals over the next week and the consortium of major firms that helped to develop it hopes to make about 1,500 a week by the start of May. Under normal circumstances, Penlon would only be able to make 50 to 60 ventilators a week. Following the approval by the Medicines and Healthcare products Regulatory Agency (MHRA), the government said it had confirmed an order for 15,000 of the new Penlon devices. (BBC)

Two major Japanese banks that are among the biggest funders of coal power have announced that they would no longer back new projects that burn the world’s dirtiest fossil fuel. A day after Mizuho Financial Group released its new decarbonisation policy, Sumitomo Mitsui Financial Group followed suit, announcing it would stop lending to new coal-fired power plants from 1 May. Mizuho—the world’s ninth-largest financier of fossil fuels—said it would halve its 300 billion yen (US$2.8 billion) in loans to coal power projects by 2030 and reduce the sum to zero by 2050. However, while the bank said it would no longer invest in new coal-fired power plants, environmentalists are concerned that loopholes built into the policy will enable continued support for coal through corporate finance. Activists say if loopholes built into the lenders’ new policies are exploited, the banks could keep funding coal regardless. (Eco-Business)

Almost half of UK’s carbon emissions not accounted for under net-zero target, report warns

The UK’s net-zero target is failing to account for emissions from overseas manufacturing of products imported into the country, a figure which a new report from wildlife organisation WWF claims accounts for 46% of the UK’s annual carbon footprint. The report, commissioned by WWF and carried out by the Sustainability Research Institute at the University of Leeds, examined what the UK’s carbon footprint would look like if the manufacturing of imported products was accounted for in UK carbon accounting. The report found that emissions from imported products including clothing, processed foods and electronics would account for 46% of the UK’s carbon footprint. However, these emissions are not covered on national reporting requirements through the UK’s net-zero target. WWF also claims that these products would not be produced if not for UK demand. The Committee on Climate Change (CCC) has made public calls for the UK to include emissions from international aviation and shipping under the new net-zero target for 2050. However, the government formally rejected these calls. (Edie)

Climate change could result in a more abrupt collapse of many animal species than previously thought, starting in the next decade if greenhouse gas emissions are not reduced, according to a study published this month in scientific journal Nature. The study predicted that large swaths of ecosystems would falter in waves, creating sudden die-offs that would be catastrophic not only for wildlife, but for the humans who depend on it. The latest research adds to an already bleak picture for the world’s wildlife unless urgent action is taken. More than a million plant and animal species are at risk of extinction owing to the myriad ways humans are changing the earth by farming, fishing, logging, mining, poaching and burning fossil fuels. If global warming was held to below 2 degrees Celsius, the number of species exposed to dangerous climate change would drop by 60 percent. (New York Times)

Leaked documents have revealed that the European Union is likely to delay some parts of its Green Deal work programme, but 2030 climate targets remain a top priority. The European Commission is set to update its environmental work programme in the next few weeks, as officials work to focus resources on tackling the coronavirus pandemic. According to leaked, work on the climate policies that underpin the Commission’s flagship Green Deal programme are to remain a top priority. However, the documents also confirm that some components of the Green Deal strategy are set to be delayed until 2021. The document noted that the Sustainable Finance Strategy and renovation programme would play a key role in any post-Covid recovery plan. Additionally, members of the G20 backed a statement that not only suspended debt repayments from least developed and developing nations, but also pledged to ensure an “environmentally sustainable” economic recovery that delivers on the United Nations Sustainable Development Goals and recognises their “long-term responsibility for our planet”. (Business Green)

Image source: White smoke coming out from building by Marcin Jozwiak on Unsplash