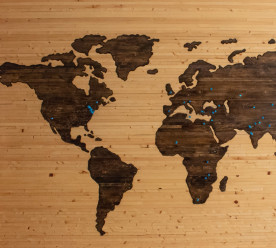 The world’s most vulnerable people could be last in line for support to deal with the coronavirus outbreak, experts have warned in a webinar hosted by the news agency, New Humanitarian. Countries already dealing with humanitarian and refugee crises face a struggle to find the resources to deal with the pandemic by the time it reaches them. Experts working with refugees, on humanitarian responses and in global health warned that the international community needs to begin working closely with governments around the world to help the most vulnerable. While many richer countries were currently focused on their own populations and economies, the humanitarian community would have to look at changing the way it works, said the experts, by investing in the strengthening of worldwide public health systems rather than focusing on single-issue campaigns. Jeremy Konyndyk, senior policy fellow at the Center for Global Development, said the humanitarian sector would have to work more with governments and local organisations, who have the trust of the communities with which they work. (The Guardian)

Social media platform Twitter says it will remove content that promotes unverified claims and misinformation about coronavirus. It said tweets that could put people at a higher risk of contracting Covid-19 would be banned under the revised safety rules. That includes unverified claims that specific groups are more susceptible to coronavirus. It also covers denial of expert guidance and unofficial advice about ways to diagnose or treat the virus. Harmful content will be triaged, it added, prioritising the removal of tweets that “present the biggest risk of harm”. However, the BBC‘s technology correspondent, Rory Cellan-Jones, said “Twitter has set itself what looks like an impossible task” owing to the volume of misinformation. He added that Twitter “may also find itself accused of Western or liberal bias, as has happened with previous attempts to crack down on other kinds of disinformation”. Earlier this week, tech giants Facebook, Google, Microsoft and Reddit announced commitments to work with governments to fight misinformation and to help connect those in self-isolation. (BBC)

A group of more than 175 big investors with $4.5 trillion in assets have written to 95 companies from Prada to Starbucks over a lack of transparency on human rights in their business and supply chains. The investors, which include Nordea and Aviva Investors, contacted the worst-performing companies on human rights due diligence according to a ranking from the Corporate Human Rights Benchmark (CHBR), part of the World Benchmarking Alliance (WBA) that tracks the treatment of employees and others in their supply chains. Pauliina Murphy, engagement director at the WBA, said that with the outbreak of coronavirus it was more vital than ever that companies take human rights seriously. In the letter, the investors called for companies to take “decisive action” to report on how they approach human rights before the CHRB begins its next round of assessments in 2020. Costco Wholesale, Ralph Lauren and Carlsberg were also among the companies that were sent the letter. (Financial Times*)

Only a third of firms measure climate impact of IT operations

A survey of 500 managers at large service-based companies, commissioned by US business software firm Citrix, recorded that only a third said their firm measured the greenhouse gas emissions created by their IT operations, including computers and hardware, as well as data storage. As many as 70 percent of those working in the telecoms sector said their organisation measured emissions from staff computing, yet only 15 percent working in utility companies and 19 percent in healthcare said the same. The report highlights a disconnect between corporate environmental goals and day-to-day IT management. It noted that a majority of large UK businesses have a specific CSR/sustainability strategy in place for IT, yet only 28 percent of managers polled considered sustainability in IT to be a top priority for their business. Michelle Senecal de Fonseca, Citrix’s area vice president for Northern Europe, called on all businesses across different industries to think about how to reduce their carbon emissions and embrace greener practices across their IT systems. (Business Green)

The UK’s total carbon footprint fell by 21 percent between 2007 and 2017, new Government data by the Department for Food, the Environment and Rural Affairs (Defra) has revealed. The total footprint covers consumption-related emissions wherever in the world they occur, they must be either directly attributable to UK households; generated by the value chain of UK-produced goods and services used by UK residents; or embedded in the value chain of imported goods and services that were ultimately used in the UK. Defra analysts broadly attribute this trend to the decarbonisation of energy used to manufacture products; the ongoing shift to service-based models; and efficiency improvements. On a shorter-term basis, the report also documents a 3% year-on-year reduction in the UK’s carbon footprint from 2016 to 2017. According to Defra, this is in line with the year-on-year trends throughout the rest of the decade and is largely the result in reduced domestic travel, and of the use of renewable electricity by UK manufacturers. (edie)