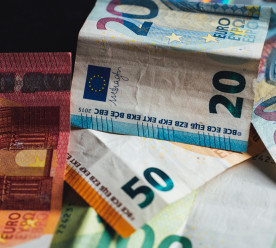 Coronavirus: Santander chairman Ana Botín to donate half of pay to virus fund

Ana Botín, chairman of Spanish multinational bank Santander, has taken a 50 percent pay cut this year to back a €25 million medical equipment fund the Spanish bank is creating to help counter the coronavirus pandemic. Santander is also postponing its interim dividend, usually paid in November, and plans to consolidate it with the full-year dividend in May as it attempts to conserve cash ahead of a likely recession caused by the social lockdown across Europe. Santander’s chief executive, José Antonio Alvarez, will also contribute half his final salary and bonus for this year to the fund, which will purchase medical equipment and protective clothing among other items. Non-executive directors on Santander’s board will contribute 20 per cent of their earnings and other senior managers have also agreed to donate, while regular staff are being invited to make voluntary contributions. (Financial Times*)

The UK government has taken the unprecedented step of asking mobile companies to send an alert to everyone in the UK telling them to heed the new nationwide lockdown rules. The message that is due to go out will provide a link to information on the new rules, as well as reminding the public that actions to isolate will protect the NHS from being overwhelmed and ultimately save lives. The government has begun talks with mobile companies about using phone location and usage data to monitor whether coronavirus limitation measures such as asking the public to stay at home are working. This comes as health officials look to develop an app to help tackle the coronavirus pandemic. However, an open letter published by a group of “responsible technologists” warns that if corners are cut, the public’s trust in the NHS will be undermined. They are urging those in charge to be more open about their data-collection plans and safeguard people’s privacy. (The Guardian; BBC)

The sustainability nonprofit organization Ceres has announced a major new effort to catalyse influential capital market leaders to address the financial risks of the water crisis and call on companies to take action. As part of the effort, Ceres has launched a new task force made up of some of the largest and most influential pension funds and banks to drive corporate action on water-related financial risks. The Valuing Water Finance Task Force aims to raise awareness within the capital markets of the widespread negative impacts of corporate practices on water supplies and the industries and practices linked to the most severe and systemic of these impacts. In partnership with members of the Valuing Water Finance Task Force, and other members of the investment and corporate and broader stakeholder community, Ceres will develop a set of clear action steps for companies in key sectors to take in order to improve water stewardship. (CSRwire)

Global beverage firm Coca-Cola and packaging company Indorama Ventures have ignited controversy by claiming that polyethylene terephthalate (PET) bottles are not single-use packaging. Environmental activists have disputed the claim, arguing that both companies’ PET recycling facility does not change the fact that PET bottles are largely discarded after being used only once. Unlike other materials like aluminium or glass, PET can only be recycled a certain number of times. Coca-Cola and Indorama signed a deal this month for a US$19 million facility, which will process nearly 2 billion clear plastic bottles and produce 16,000 metric tonnes of recycled PET resin a year. Sonia Mendoza, chairwoman of Mother Earth Foundation, a Philippine-based non-profit known for advocating zero waste programmes in Southeast Asia, noted that while the Coca-Cola’s recycling facility is a “big step towards diverting plastic from the ocean”, the collection of used bottles is worrisome, as the country has a poor garbage segregation system that mixes recyclables with other waste. (eco-business)

The number of investigations into businesses launched by the Environment Agency increased by 12 percent from 5,518 in 2018 to 6,164 in 2019, according to a new analysis from City law firm RPC. The analysis shows that the watchdog’s planned crackdown on businesses breaching water, waste management, and agricultural rules has been intensifying, with RPC noting that there had been a “significant step up activity in the lead-up to the UK’s exit from the EU, amid fears that environmental standards could slip following Brexit”. Much of the agency’s focus has been on the water industry, however enforcement action is also stepping up in other areas with the government recently announcing the creation of the Joint Unit for Waste Crime, which sees environmental regulators work with HMRC and the National Crime Agency to crack down on waste crimes. Steven Aitken, a senior associate at RCP, said the new data highlighted the legal risk firms face if they fail to ensure their operations are compliant with environmental rules. (Business Green)