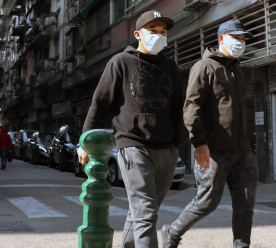 Fear grows over the ability for the United Nations (UN) COP26 climate summit to go ahead later this year, due to the coronavirus. This year’s UN talks, scheduled for Glasgow this November, are the most important since the Paris agreement in 2015, as the world is now far adrift of the Paris goals. Tom Burke, the co-founder of the environmental group E3G, said the preparations were already being affected by Covid-19. The coronavirus “is already having an impact and if it gets much worse, there will be a more significant impact”. However, people with experience of the talks also said the UK and the UN would take advantage of communications technology to carry on with diplomatic preparations. At the Paris talks, negotiators held regular confabs on Facebook and other forms of social media, and have active WhatsApp groups. The European Commission said there had been “no significant impact for the time being” on COP26 preparations and the EU and China were “maintaining contacts via videoconferencing and through diplomatic channels at various levels. (The Guardian)

Coronavirus: Asia’s poor bear the brunt of the virus

Millions of homeless people living in informal settlements across Asia are at heightened risk of contracting the coronavirus due to their living conditions, housing experts said on Tuesday. “Given that new infectious diseases will likely continue to spread rapidly into and within cities, low-income settlements need more effective infrastructure,” said Cecilia Tacoli, a researcher at the International Institute for Environment and Development. Globally, about 1.8 billion people live in inadequate housing and homelessness, according to the United Nations. While handwashing is a basic precaution against the coronavirus, about 40 per cent of the world’s population do not have such a facility with water and soap at home, according to UNICEF. While the Hong Kong government has announced handouts to tackle the outbreak, some public housing has been converted into quarantine centres, thereby reducing an already constrained supply of public housing. In India, at least 4 million people are homeless in urban areas, and more than 70 million live in informal settlements, said non-profit Housing and Land Rights Network. (Eco-Business)

Coronavirus: Amazon to suspend non-essential shipments to UK and US warehouses

Online retail giant Amazon is stopping sellers from sending non-essential items to its UK and US warehouses until 5 April, to make space for vital items needed by its customers during the coronavirus outbreak. Amazon wrote to its third-party sellers, some of whom use the company’s logistics to store and dispatch their products, to inform them that stocks of medical supplies and certain household items are running low due to increased demand from online shoppers. The US company is prioritising five categories of goods which it calls essential products, and which shippers can continue to send to its warehouses – these include baby products, health and household; beauty and personal care; groceries; industrial and scientific; and pet supplies. Amazon said it is prioritising these categories in order to “quickly receive, restock, and ship these products to customers”. The Seattle-based chain has also said it will hire 100,000 full- and part-time workers across the US, as it tries to meet growing demand from online shoppers who are staying at home during the outbreak. (The Guardian)

Finnish Forestry giant UPM has secured a revolving credit facility (RCF) with retail banking company BNP Paribas to help drive sustainable forest management initiatives. UPM has become one of the first businesses in the world to link repayments on a €750 million loan to its performance against long-term biodiversity and climate targets. The company announced yesterday that it has become the latest firm to take advantage of a syndicated RCF with the pricing mechanism linked to its biodiversity and climate targets. The margin of the RFC is tied to two key performance indicators: the achievement of a net positive impact on biodiversity in the company’s own forests in Finland; and a 65 percent reduction on CO2 emissions from fuels and purchased electricity by 2030 against 2015 levels. Finally, UPM has developed a range of indicators and methods to monitor a net positive impact on biodiversity indicating the positive role of sustainable finance to link to progressive decarbonisation targets. (Business Green)

Fast-food giant McDonald’s has pledged to remove plastic toys from its ‘Happy Meals’ in an effort to reduce plastic waste. The announcement of the measure comes following a highly-publicised petition led by two schoolgirls calling on the fast food chain to cut plastic from its Happy Meals, which are geared towards children and contain a small toy. In a press release, the company stated that from 2021, every Happy Meal in the UK will include either a soft toy, a paper-based toy or a book, as opposed to a toy made from non-sustainable hard plastic. The firm claims that this measure will remove more than 3,000 metric tons of plastic from its business. Furthermore, McDonald’s states the removal of plastic from its Happy Meals marks the biggest reduction of plastic by McDonald’s UK and Ireland to date. In September, McDonald’s and competitor Burger King both announced the companies were pledging to cut down on plastic children’s toys. (The Independent)