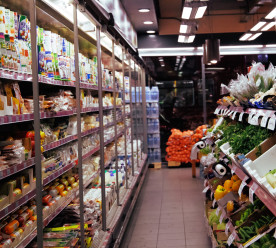 As the coronavirus outbreak continues to spread across the globe, many companies are looking for ways in which they can support vulnerable businesses and individuals. Supermarket chain Morrisons has committed to pay its small suppliers immediately to help keep them afloat amid coronavirus uncertainty. Paying them immediately will help them weather any difficulties they face through disruptions to their manufacturing processes, or if any of their staff go sick, a spokesman said. Supermarkets are also facing a unique problem of keeping up with demand as customers clear shelves. Several stores have limited the sales of certain products to avoid them selling out completely. In response to elderly shoppers who are particularly vulnerable to Covid-19 and may not be as able to stock up on goods, Iceland has announced that some stores will open one hour early. The supermarket has stated this is not a company policy, but that individual stores can decide how best to meet the needs of shoppers in their local areas. The aim is to allow older shoppers to buy food when it is quieter and to make the experience “as stress-free as possible”. (BBC; BBC)

Tech giant Apple has been fined a record €1.1 billion by antitrust regulators in France for engaging in anti-competitive agreements with two wholesalers. The penalty imposed on Apple is the largest ever handed out to a company by the Autorité de la Concurrence. The regulator said Apple had conspired with the two wholesalers, Tech Data and Ingram Micro, and behaved in such a way that aligned prices and limited wholesale competition for Apple products such as Apple Mac computers and iPads, but not iPhones. The other two French companies were also fined. Tech Data was handed a €76 million penalty and Ingram Micro was ordered to pay €63 million. Apple said the French decision would “cause chaos for companies across all industries” and said it would appeal. The US company said customers should be allowed to choose the product they want, either through Apple Retail or its large network of resellers across France. (The Guardian)

British American Tobacco (BAT) has been found to be marketing e-cigarettes and heated cigarettes with pictures of attractive models and using hashtags such as “I dare you to try it”, despite a crackdown last year after it paid social media influencers to promote its products. In the UK, the Advertising Standards Authority banned e-cigarette-makers from paying influencers to promote their products on Instagram. After the ban, social network platforms Facebook and Instagram both announced in December that they would no longer allow influencers to promote tobacco or e-cigarettes. Since the policy changes, experts say BAT is now running its own accounts that mirror the youth-oriented content promoted by influencers. BAT is also using paid adverts and branded content on Facebook, despite it not being allowed under the social media platform’s rules. Facebook said it had removed the adverts brought to its attention and did not allow the sale or advertising of tobacco-related products on the site or on Instagram. (The Guardian)

The UN’s International Civil Aviation Organisation (ICAO) will introduce stricter rules on carbon offsetting for airlines next year, in a bid to reduce greenwashing and ensure robust carbon accounting. The ICAO made the decision to alter eligible emissions units and offsets permitted under the industry-wide Carbon Offsetting and Reduction Scheme for International Aviation (CORSIA), following calls to action from green groups and financial and climate advisors. Under the alterations, older and smaller carbon offsetting schemes will be excluded from the list of permitted sources from January 1st 2021. The move, ICAO claims, will help to mitigate risks and systemic “gaps” within the carbon offsetting space, including greenwashing, double counting and unintended negative consequences on issues such as biodiversity or community sustainability. The ICAO also warned businesses that the new rules will apply through to the end of 2023 only. At this point, tougher requirements, which will be developed and communicated in 2022, could be brought in. (edie)

Neste, a Finnish oil and refining company, has committed to become ‘carbon neutral’ across its production activities by 2035. They said the target would build on its existing goal to reduce customers’ greenhouse gas emissions by at least 20 million tons annually by 2030. The company has emerged as a major player in the nascent jet biofuel sector, working with airlines such as Finnair and KLM on a range of sustainable fuel programmes. For example, in December KLM purchased sustainable fuel from Neste made from cooking oil which is 80 percent less carbon intensive than fossil kerosene. The news came in the same week as the company announced it had teamed up with sustainable equity fund Mirova to develop chemical recycling methods which will help Neste further bolster its circular economy services. Peter Vanacker, President and CEO of Neste, said the new goal was in line with the company’s “purpose to create a healthier planet for our children”. (Business Green)

Image source: assorted fruits on display in store by Mehrad Vosoughi on Unsplash.