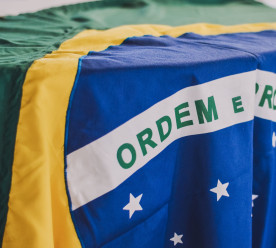 Brazil’s far-right president, Jair Bolsonaro, has unveiled a controversial bill that would allow commercial mining on protected indigenous lands, delivering on a campaign promise that has shocked tribal leaders and environmentalists. The bill to regulate mining including oil and gas projects, as well as hydroelectric dams, on indigenous reservations for the first time, will be sent to congress this week. Brazil’s constitution currently does not rule out mining on reservations but does not allow it because it has not been regulated. Bolsonaro has long alleged that Brazil’s indigenous people occupy too much land – 13 percent of the country – and hinder economic development of untold mineral resources, from gold and diamonds to niobium and rare earths. But leaders of most of Brazil’s 300 tribes oppose mining on their reservations and say that allowing commercial mining would undermine their communities and wipe out their cultures, which are already threatened by increasing invasions by illegal loggers and wildcat miners. (The Guardian)

From discriminatory adoption laws to denial of transgender healthcare, a rising number of U.S. corporate giants are joining forces to protest about a slew of anti-LGBT+ state legislation. American Airlines, hotel giant Marriott International and footwear maker Nike were among 36 firms that spoke out this week against a law allowing adoption agencies to turn away LGBT+ couples on religious grounds, passed in Tennessee in January. “Policies that signal that the state is not welcoming to everyone put our collective economic success at risk,” the companies, which also included Amazon, Dell Technologies and Nashville International Airport, said in an open letter, adding that visitors spent more than $22 billion in 2018. A growing number of companies see diversity as good for business, with surveys showing that LGBT+ inclusive workplaces perform better financially, attract customers who care about equality, and find it easier to attract and retain talent. (Thomas Reuters Foundation)

Lego has vowed to eliminate virgin fossil-based plastics from its products within a decade, by investing heavily in recycled and bio-based materials. The Danish toymaker’s chief executive Niels B. Christiansen announced the new goal today, telling journalists that Lego is “testing lots of different materials” to replace virgin fossil-based plastic. Some plastic products could be replaced by sustainably sourced wood, but Lego believes the majority of the material gap left by the virgin, fossil plastics phase-out could be met with recycled materials or bioplastics. Lego first moved to incorporate sugarcane-based bioplastic into its products in 2018, when it began selling botanical-themed pieces made from responsibly sourced bio-polyethene. The launch received much media attention and the range has received positive feedback from consumers so far – but as of 2019, only 1-2% of Lego’s total plastics product output was bio-based. In order to scale up the bio-plastic and recycled plastic supply chain, Lego’s Christiansen has vowed to make a multi-million-pound investment. (edie)

Female genital mutilation (FGM) is exacting a “crippling” economic toll on many countries, the United Nations has said as it launched a tool to help them calculate the cost of treating girls and women harmed by the practice. An estimated 200 million girls and women worldwide have undergone FGM, which causes a host of mental and physical health problems including haemorrhaging, chronic infections, cysts and life-threatening childbirth complications. The World Health Organization (WHO) calculated it would cost $1.4 billion a year to treat all resulting medical needs. “FGM is not only a catastrophic abuse of human rights that significantly harms … millions of girls and women, it is also a drain on a country’s vital economic resources,” said Ian Askew, WHO’s head of sexual and reproductive health. Global anti-FGM charity 28 Too Many said the health costs were a “drop in the ocean” compared to the wider costs for society and the economy as these girls are often married young with limited education which holds back countries economic development. (Thomas Reuters Foundation)

US natural gas utilities are rallying against an emergent threat to their historically stable business as communities worried about climate change block new pipelines and gas connections for homes. As the cleanest-burning fossil fuel, natural gas reduced total US energy-related carbon emissions as it displaced coal at power stations. The majority of household heating, hot water and cooking is now fuelled by gas, while it is also the most-used input for US electricity generation, aided by cheap supplies from shale drilling. However, this has led annual emissions from gas to increase by nearly 500m tonnes in the past 10 years, including a 4 percent rise in 2019, the Energy Information Administration estimates. This rise has stoked opposition against new pipelines and home connections, with climate activists saying energy demand could be better served by renewable sources. Mark Brownstein, senior vice-president of energy at the Environmental Defense Fund, said gas utilities used to be able to take for granted the fact that they had a captive customer base. “They are now going to have to compete — and they’re going to have to compete not just on how well the product cooks food or heats homes, but how clean it is.” (Financial Times)*