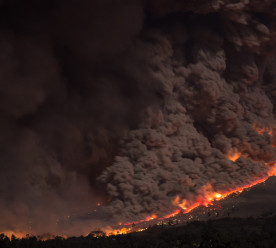 A year of extreme weather events and mounting evidence of global heating have put the climate emergency as the top of the list of issues worrying the world’s elite, according to the World Economic Forum’s (WEF) annual risks report. The report also found that, for the first time in its 15-year history, the environment filled the top five places in the list of concerns likely to have a major impact over the next decade. It said the top five risks in terms of likelihood in the next 10 years were: extreme weather events; failure of climate-change mitigation and adaptation; human-made environmental damage and disasters; major biodiversity loss; and ecosystem collapse resulting in severely depleted resources and major natural disasters. The news comes as Sir David Attenborough, the renowned naturalist and broadcaster, has warned “the moment of crisis has come” in efforts to tackle climate change in a BBC News interview. (The Guardian, BBC)

Women make up one third of executive boards but occupy only a small minority of leadership roles in Europe’s biggest companies, according to a study by a European Union-sponsored non-profit organisation. The study, published by Brussels-based association European Women on Boards, found that only 28 women headed companies included in Europe’s STOXX 600 index, which tracks companies across 17 European countries. Only 7 percent of those companies have female board chairs. The United Nations has set a 2030 target deadline for achieving gender equality, but studies indicate that no country has yet managed it. The report offered no specific recommendations, but the research suggested countries that have adopted diversity legislation and binding quotas did not seem to do better than those where progress has been made through social change. Among the 12 countries with at least 10 companies represented, Norway ranked top for gender diversity, followed by France, which had the highest number of women in supervisory boards and control committees. At the other end of the table Switzerland closed the ranking. (Reuters)

The largest pharmaceutical company in Asia, Takeda, has announced its commitment to fighting climate change with new pledges for 2020. The company has set an objective of achieving carbon neutrality across its entire value chain by 2040, with a goal of reducing carbon emissions by 40 percent by 2025. The new targets follow Takeda meeting its previous target of reducing CO2 emissions by 33.7 percent by 2020. Takeda is also aiming to improve the environmental performance of its suppliers and partner companies too through its sustainability strategy. President and CEO, Christophe Weber said in a statement “we also recognise that supporting our patients means we must commit to work on behalf of the broader global community – and one way to do this is by accelerating our environmental efforts.” The Japanese giant employs almost 50,000 people worldwide and achieved revenues of US$19.3 billion in 2018, meaning any lead it takes on eco-streamlining operations has the potential of impacting and influencing the rest of the industry (CSO)

The Ellen MacArthur Foundation has launched a new digital tool which enables businesses of all sizes and sectors to measure their contribution to the circular economy and identify ways in which to close the loop further. Called ‘Circulytics’, the tool was revealed to the UK’s wider business community at a launch event in London, following smaller-scale trials at more than 30 businesses including Unilever, Ikea’s Ingka Group, Groupe Renault and DS Smith. It enables users to track the extent to which their business is contributing to the Foundation’s three principles of a circular economy – designing out waste and pollution; keeping products and materials in use; and regenerating natural systems – by accessing data across 18 metrics. Appetite to bridge this gap between ambition and action on the circular economy seems high, with more than 100 businesses having pre-registered to use Circulytics ahead of its launch. The tool is being made open-source and free-to-use. (edie)

The Department for Food, the Environment and Rural Affairs‘ (Defra) Agriculture Bill has been introduced in the UK, confirming the Government’s plans for rewarding farmers that make environmental improvements and safeguarding green standards post-Brexit. The Bill includes measures that will see farmers and land managers rewarded financially for work to improve air and water quality; boost soil health; implement flood mitigation and adaptation measures; improve access to the countryside or bolster animal welfare. Payments under this incentive scheme will be rolled out over a seven-year period starting in 2021, replacing some of the existing Common Agricultural Policy’s incentive schemes. Elsewhere, the Bill introduces a new requirement for the UK Government to regularly report on food security to Parliament. Given that around half of the food consumed annually in the UK is imported, Brexit has repeatedly been flagged as a potential threat to food security, alongside environmental issues. (edie)