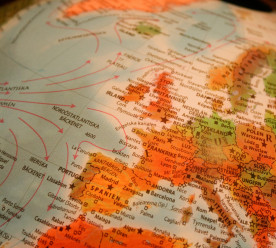 The European Investment Bank (EIB), the world’s largest multilateral financial institution, has agreed to phase out its multibillion-euro financing for fossil fuels within the next two years to become the world’s first ‘“climate bank”. The bank will end its financing of oil, gas, and coal projects after 2021, a policy that will make the EU’s lending arm the first multilateral lender to rule out financing for projects that contribute to the climate crisis. The decision to stem the flow of capital into fossil fuel projects has been welcomed by green groups as an important step towards the EU’s aim to be carbon-neutral by 2050. Under its new policy, which the EIB described as a “quantum leap” in ambition, the bank will end all lending to fossil fuels and align all funding decisions with the Paris climate accord. Energy projects applying for EIB funding will have to show they can produce one kilowatt hour of energy while emitting less than 250 grammes of carbon dioxide. (The Guardian)

A study of 200 of the world’s biggest apparel, food & drink, tech manufacture and material extraction firms have found that less than half are able to show they are meeting the UN’s Guiding Principles on Human Rights. Conducted by UK-based non-profit Corporate Human Rights Benchmark (CHRB), the study assesses how corporations in these sectors are performing across 100 human-rights-related indicators, using publicly available information on issues such as forced labour and wages. Of the 200 corporations assessed, 100 have been assessed since the CHRB’s inception in 2016 and 100 have been added for this year. While praising the original 100 firms for increasing their average score from 18% to 32% over the past 12 months, the report states that the average score of 17% among the new cohort is “very concerning”. Moreover, when all the firms are analysed, one in four received a score of 10% or less and one in two failed to meet any of the UN’s five basic criteria for human rights. (edie)

Broad failures to deploy ambitious forest and land-use practices mean the consumer goods sector will not meet its 2020 commitment to ‘net-zero’ deforestation, according to a new report published by environmental reporting firm CDP. Called ‘No Wood for the Trees’, the report analyses the exposure of each firm within the sector to both physical and transition risks associated with deforestation in supply chains. It additionally assesses the strengths and weaknesses of each company’s climate and governance strategy and ranks companies’ ability to benefit from the transition to a deforestation-free supply chain. Of the 22 companies in the sector assessed, CDP found that just one-third have deployed comprehensive management practices around forestry and land use. Danone, Nestle, L’Oreal, Unilever, Kellogg and Mars respectively took the top six spots in CDP’s rankings. But, despite the work of some leading consumer goods companies to eliminate deforestation from their supply chains, the sector is still unlikely to meet the 2020 net-zero deforestation commitment. (edie)

The Green Climate Fund, which provides finance for developing nations to tackle climate change, said it has reached a milestone of action in more than 100 countries, after approving $408 million for new projects. At a three-day board meeting in South Korea, the international fund – which replenished its funds with pledges of nearly $9.8 billion last month – agreed to allocate money to 13 projects, from water banks in northern Gaza to protecting food crops from climate threats in Mozambique. Board co-chair Nagmeldin Goutbi Elhassan Mahmoud said fresh contributions made by 28 donor countries last month would help meet growing demand for initiatives to cut climate-warming emissions and adapt to wilder weather and rising seas. At this week’s meeting, a further boost came from Indonesia, which pledged $500,000, doubling its first contribution. The fund is now investing $5.6 billion worldwide including several new efforts to protect carbon-storing forests in Laos, Kyrgyzstan, Chile and Paraguay. (Eco-Business)

British bank Halifax has joined HSBC in helping customers to self-exclude their bank cards from spends on gambling. The function allows customers to block their cards being used at bookmakers and gambling websites, helping to prevent problem gamblers betting money they can’t afford to lose and restrict impulsive behaviour. Halifax customers who have opted in to the service will not have their cards “unfrozen” for 48 hours, to help “protect those who might otherwise make an impulsive return to gambling”. HSBC says about 500,000 customers placed bets every month in 2018, spending an average of £52.50. It received more than 12,000 calls about gambling last year. High-street lender NatWest said last month that it would offer counselling sessions for gambling addicts inside branches as part of a pilot scheme that could be rolled out across the country. (The Guardian)