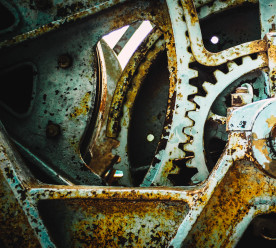 The UK government has launched a £315 million hunt to find new technologies that can reduce the carbon footprint of the most polluting factories to help meet the UK’s climate targets. The scheme will offer funds over the next five years to energy-intensive firms, such as manufacturers, to invest in new technology which can reduce their energy use. Ministers hope the scheme will help save £1 billion a year on industrial energy bills and cut carbon emissions by 2 million tonnes or the equivalent of taking nearly 200,000 cars off the road each year. The government finalised the design of the Industrial Energy Transformation Fund – which opens for bids next summer – just before the start of the general election campaign. Energy minister Kwasi Kwarteng said the fund will bolster investment in clean growth as it works towards its climate targets. The fund builds on a scheme to help clean up climate emissions from the UK’s steel manufacturing sector. (The Guardian)

Carbon transition threatening half of car manufacturers, according to Moody’s

Half of car manufacturers are not yet in a strong position from which to navigate the transition to a low carbon future, according to financial services firm Moody’s. The company’s latest carbon transition assessments (CTAs) scores the world’s leading auto manufacturers against a 10 point scale based on their readiness for a rapid transition towards cleaner and zero emission vehicles. Only Tesla achieved a top score, while just five companies – Beijing Automotive Group, BMW, Geely, Honda and Toyota – received relatively strong scores. In contrast, Moody’s warned that some car manufacturers were facing serious risks as the transition to cleaner vehicles accelerates. The report calculated that half of the 20 companies scrutinised needed a sharp increase in capital spending to achieve a fleet comprised of around 25 percent battery electric vehicles and plug-in hybrid electric vehicles in a decade’s time – the level outlined under the International Energy Agency’s (IEA) sustainable development scenario. (Business Green)

Tens of thousands of garment workers in Cambodia could face exploitation if proposed EU trade sanctions cause major fashion brands to downsize, labour rights activists have warned. The garment industry is Cambodia’s largest employer but faces uncertainty after the EU began a process that could see tariffs reintroduced next August. The European Chamber of Commerce estimates that 90,000 jobs would be at risk if the EU suspended special trade preferences over Cambodia’s record on democracy and human rights. Workers who would lose their jobs, mainly women, would likely end up in the entertainment or service industries and be exposed to sexual exploitation, said Khun Tharo of the Center for Alliance of Human and Labor Rights. Tharo stated the alternative would be migrating to Thailand where two million Cambodians are estimated to work, many of them undocumented and vulnerable to modern-day slavery. David Savman, head of production at H&M, said the company would do less business in Cambodia if the trade benefits ended and named China and Indonesia as alternative sourcing countries. (Thomson Reuters Foundation)

Investment bank Goldman Sachs is offering prospective parents in its workforce up to $20,000 to cover the costs of extracting eggs or purchasing donated eggs as part of its latest efforts to boost equality and close the gender pay gap at the Wall Street investment bank. It is the first time that Goldman has provided funds for both processes, which can help increase the chances of parenthood for same sex couples, women who want to delay having children or others who struggle to conceive. Senior staff stated the new benefits were “designed to enable everyone in our workforce to better manage the commitment to their careers while starting, growing and supporting a family”. The benefits come nearly a year after Goldman Sachs added sex-reassignment surgery and IVF fertility treatments to its employee benefit plan. This follows as a number of firms have been ramping up benefits for parents in a move that campaigners have said could help close the UK’s gender pay gap. (The Guardian)

The Bank of England has told insurance companies to improve their working cultures after revelations about sexual harassment and bullying in the industry. In a letter to chief executives of general insurance companies, the Bank’s regulatory arm said it was deeply concerned about reports of abuse and intimidation. The Prudential Regulation Authority (PRA) said bad behaviour could result in senior managers being banned from the sector. A survey in September found almost 500 workers at the Lloyd’s of London insurance market had suffered or witnessed sexual harassment in the previous year. The survey, commissioned by Lloyd’s after reports of bullying and harassment, found women’s experiences at work were far worse than men’s. The survey found only 45% of respondents felt comfortable about raising wider concerns over the companies where they worked. Gareth Truran, the PRA’s acting director of insurance supervision, said working culture was just one of several areas he would be watching out for at general insurers. (The Guardian)