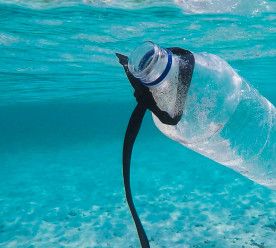 Over the last 12 months, some of the world’s biggest businesses have made “promising” progress in efforts to eliminate single-use plastics and transition to a circular economy, according to a new report which revealed that pledges to increase recycled plastic in packaging have grown five-fold. The progress report by the Ellen MacArthur Foundation comes one year after the launch of the ‘New Plastics Economy Global Commitment’. Through the commitment, more than 400 organisations have committed to eliminating unnecessary plastic packaging and ensuring that all plastic packaging is 100 percent reusable, recyclable, or compostable. According to the report, common single-use plastic items such as straws, carrier bags and black carbon plastics are being eliminated by 70 percent of relevant business signatories and 80 percent are eliminating PVC from packaging. Analysis carried out for the report found that 60 percent of business’ plastic packaging is now reusable, recyclable or compostable today. This follows yesterday’s report by Break Free From Plastic that called recyclable packaging a false solution. (edie)

Pension funds and asset managers will have to disclose their shareholder voting records on issues including the climate crisis, as part of UK guidelines that will come into force in January. The revamped stewardship code means firms will have to publish annual reports showing they have taken environmental, social and governance (ESG) issues into account when investing and engaging with companies. Signatories will have to prove they took appropriate action in the preceding 12 months by publishing their full shareholder voting records. They will also have to explain the rationale behind their voting decisions and outline how they are responding to systemic risks such as the climate emergency. The Financial Reporting Council (FRC), the accounting watchdog, said it would help “align the approach of the whole investment community”. The Investment Association, which represents firms with £7.7 trillion in assets under management, welcomed the revised code and said it set an “ambitious standard” for UK firms. (The Guardian)

According to United Nations climate scientists, $300 billion could stop the rise in greenhouse gases and buy up to 20 years of time to fix global warming. The sum is not to fund green technologies or finance a moon-shot solution to emissions, but to use simple, age-old practices to lock millions of tons of carbon back into an overlooked and over-exploited resource: the soil. Rene Castro Salazar, an assistant director general at the UN Food and Agriculture Organization (FAO), said that land around the world that has been degraded by misuse, overgrazing, deforestation and other largely human factors. Returning that land to pasture, food crops or trees would convert enough carbon into biomass to stabilize emissions of CO2, the biggest greenhouse gas, for 15-20 years, giving the world time to adopt carbon-neutral technologies. Eduardo Mansur, director of the land and water division at the FAO, said the heart of the idea is to tackle the growing problem of desertification – the degradation of dry land to the point where it can support little life. (Bloomberg)

The US federal government has sued California over its effort to reduce greenhouse gas emissions, taking aim at its cap and trade program. The US Department of Justice accused California of unlawfully entering into an agreement with the Canadian province of Quebec to cap greenhouse gas emissions and require companies to buy pollution credits. Cap and trade plays a prominent role in California’s goal of drastically cutting greenhouse gas emissions in the coming decades to fight climate change. The state has increasingly positioned itself as an international leader on climate policy in opposition to President Trump, a sceptic of climate science who has pushed aggressively to undo environmental protections. The lawsuit by the Trump administration claims that California “intruded into the federal sphere” by pursuing an “independent foreign policy in the area of greenhouse gas regulation.” (San Francisco Chronicle)

Social media platform TikTok has hit back against claims of Chinese government interference over content shown on the video-sharing app. The popular platform, owned by Beijing-based Bytedance, said it “does not remove content” based on Chinese sensitivities. It follows concerns raised by US lawmakers over whether Beijing censors content on the app and data collection. In a statement the company said, “we are not influenced by any foreign government, including the Chinese government”. TikTok said all US user data is stored in the United States, with a backup in Singapore. The pushback by TikTok comes after US senators Tom Cotton and Chuck Schumer requested intelligence officials assess the national security risks posed by the company, and other Chinese content platforms. It comes on the heels of heightened US scrutiny of another Chinese tech giant, Huawei. (BBC)