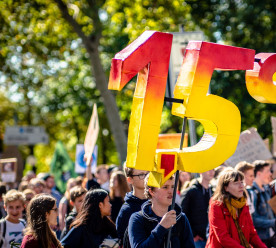 The Mayors of cities including Los Angeles, Copenhagen and Paris have issued a rallying call for the adoption of a Global Green New Deal that recognises the threat of the climate emergency and strives to transition to a low-carbon future through a fair and just transition, convening at the C40 Summit. The Global Green New Deal calls on nations to publicly recognise the global emergency and commit to limiting global heating to below the 1.5C threshold of the Paris Agreement as a response. Speaking at the event, C40 President Michael Bloomberg argued that collaborative efforts that span the public and private sectors, like the America’s Pledge agreement, will ultimately drive a just transition to a low-carbon economy. The Green New Deal movement has been around for over a decade but hit mainstream media following Democratic congresswoman Alexandria Ocasio-Cortez’s intentions to create a US iteration of the deal. (edie)

European CEOs: Changing consumer behaviours is the next sustainability frontier

The CEOs of some of Europe’s largest corporates have concurred that although consumer awareness of sustainability issues is rising rapidly, the responsibility for changing behaviours lies with big businesses. Consultancy Xynteo spoke with the leaders of 27 of the continent’s largest firms and a further 105 corporate representatives, to find out how to unlock a “new model” of growth which does not harm the environment or create social issues. The most commonly cited “job to be done” was moving business purpose beyond simply delivering returns for shareholders, to a model in which boards, teams and investors are engaging with a broader model, encompassing benefits to people and the planet. Survey respondents also reported that consumers can be “irrational” and swayed by misinformation or a lack of information about the broader impacts of certain changes. The CEOs concluded that the primary focus should be to help the public consume fewer resources and explore business models which change linear models of consumption, such as refill, reuse, resale and service-based models such as rental and repair. (edie)

Tech giant Google has made “substantial” contributions to some of the most notorious climate deniers despite its insistence that it supports political action on the climate crisis. Among hundreds of groups the company has listed on its website as beneficiaries of its political giving, more than a dozen have campaigned against climate legislation, questioned the need for action, or actively sought to roll back Obama-era environmental protections. Google has defended its contributions, saying that its “collaboration” with organisations such as the Competitive Enterprise Institute “does not mean we endorse the organisations’ entire agenda”. A spokesperson for Google said it sponsored organisations from across the political spectrum that advocate for “strong technology policies”. “We’re hardly alone among companies that contribute to organisations while strongly disagreeing with them on climate policy,” they added. However, environmental activists argue that for a company that supports global action on climate change, such trade-offs are not acceptable. (The Guardian)

Brewing giant, Carlsberg has unveiled its latest designs for what it is hailing as the world’s first ‘paper’ beer bottles, continuing its bid to drive down the amount of plastic used in its packaging. The two research prototypes for its Green Fibre Bottle are made from sustainably-sourced wood fibre and have an inner barrier to allow them to contain beer. Carlsberg has been working on the paper bottle designs since 2015 alongside tech firm ecoXpac, packaging company BillerudKorsnäs, and researchers from Danish Technical University. Vice president at Carlsberg Group, Myriam Shingleton, notes that “partnerships such as these, united by a desire to create sustainable innovations, are the best way to bring about real change”. The company’s ambition is to eventually create a 100 percent bio-based bottle without polymers, an aim that forms part of Carlsberg’s wider sustainability goals to achieve zero carbon emissions at its breweries and a 30 percent cut in its full value chain CO2 footprint by 2030 against a 2015 baseline. (Business Green)

Venture capital firm BP Ventures has expanded its digital energy portfolio with an investment in tech start-up Grid Edge, which has developed AI-enabled software that allows commercial and industrial buildings to better control their energy use. The cloud-based software anticipates a building’s energy demand, using data such as weather forecasts and expected occupancy to optimise performance. Building managers can then also adapt energy use to exploit periods of high renewable power generation, effectively using their building’s flexible energy demand and generation like a giant battery. The technology typically enables customers to lower carbon emissions by 10 to 15 percent, with some registering a reduction of more than 30 percent, Grid Edge said. Dev Sanyal, chief executive of BP Alternative Energy, said the move fitted into the company’s wider clean tech investment plans to support “our strategy to create an ecosystem of distinctive, digitally-enabled, low carbon business for commercial and industrial customers”. (Business Green)

Image source: group of people standing near trees by Mika Baumeister on Unsplash.