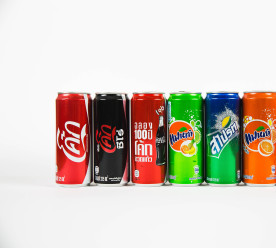 Singapore: Unhealthy label for high-sugar drinks, total ban on ads to be introduced

Singapore is to become the first country in the world to introduce a total ban on advertisements of packaged drinks with very high sugar content. Medium-to-high sugar content drinks must also carry a label on the front of the pack to signal that it is unhealthy. Senior Minister of State for Health, Edwin Tong, said these changes are designed to encourage people to make more informed choices and to get manufacturers to reduce the sugar content in packaged sugar-sweetened beverages. The front-of-pack label will be colour-coded and show a grade to indicate if the drink is healthy, neutral or unhealthy. More than 30 countries have introduced such labels, with great success. In Chile, for example, the sales of drinks carrying the unhealthy label fell by 25 percent after one and a half years. The amount of sugar will be a large determinant of the grade a drink gets. Other factors include the amount of saturated fat. (The Straits Times)

Report: 20 firms behind a third of all modern carbon emissions

Data published by British newspaper, The Guardian, shows that 20 fossil fuel companies can be linked to more than one-third of all greenhouse gas emissions in the modern era. The analysis, by the US Climate Accountability Institute, shows that fossil fuels extracted by the 20 companies have contributed 480bn tonnes of carbon dioxide equivalent emissions since 1965 – the point at which experts say the environmental impact of fossil fuels was known by both industry leaders and politicians. Those identified range from investor-owned firms – household names such as Chevron, Exxon, BP and Shell – to state-owned companies including Saudi Aramco and Gazprom. The Guardian approached the 20 companies named in the list. Seven of them replied. Some argued that they were not directly responsible for how the oil, gas or coal they extracted were used by consumers. Several disputed claims that the environmental impact of fossil fuels was known as far back as the late 1950s or that the industry collectively had worked to delay action. All pointed out efforts they were making to invest in renewable or low carbon energy sources and said fossil fuel companies had an important role to play in addressing the climate crisis. (The Guardian)

Workers on farms and plantations that supply big UK supermarkets are being subjected to poverty and human rights abuses, according to research published by the international NGO, Oxfam. The report cites a “relentless” drive for retailer profits, which is fuelling poverty, abuse, and discrimination. Oxfam conducted research in India and Brazil, and surveyed workers in five other countries. The research identified that half the workers questioned got ration cards from the government due to low wages, while female employees regularly worked for up to 13 “back-breaking” hours a day. Oxfam found that, of the 79p paid by shoppers for a 100g pack of black Assam tea in the UK, supermarkets and tea brands receive 49p while workers collectively received 3p. Tesco, Sainsbury’s, Morrisons and Aldi all source tea from those suppliers, while Asda-owner Walmart would neither confirm nor deny whether it did. Peter Andrews, head of sustainability at the British Retail Consortium (BRC), said: “Supermarkets in the UK are spearheading actions aimed at improving the lives of the millions of people across the globe who contribute to the retail supply chain”. (BBC)

An emissions tool offered by tech giant, Google, in the US to help cities measure pollution is now available in Europe. The Environmental Insights Explorer (EIE) tool compiles transport and building data from Google Maps with publicly available information about emissions. Google will initially offer it to Birmingham, Manchester, Wolverhampton and Coventry, Dublin and Copenhagen, adding more cities in coming weeks. The tool offers data on building, transport and general emissions as well as information on solar potential. The dashboard is designed to help cities see what changes they could make to lower emissions, such as creating more bike lanes or installing solar panels on buildings. Google Street View cars have been measuring air pollution as they drive through cities, and this data will be shared via the tool. Global Covenant of Mayors for Climate and Energy executive director Amanda Eichel said “EIE can serve as a critical first step for city sustainability teams to assess and monitor their progress”. (BBC)

A coalition of more than 400 businesses in London has partnered with the UK Stakeholders for Sustainable Development (UKSSD), to accelerate business contributions towards the UN Sustainable Development Goals (SDGs). The UKSSD, a network of more than 100 organisations, has officially partnered with BEE Midtown, which covers businesses in the Holborn, Bloomsbury and Covent Garden areas of central London. The partnership will design programmes that enable members to develop solutions that accelerate progress towards the SDGs. The two groups hope the initiative can act as a pilot for the rest of London and the UK to embed the SDGs into regional and business action plans. Together with the Evening Standard newspaper, Bee Midtown is creating a pilot project on the reduction in the use of plastic and is working to improve biodiversity in the area. (edie)