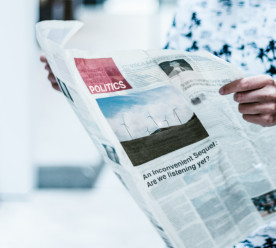 The governor of the Bank of England, Mark Carney, has warned major corporations that they have two years to agree rules for reporting climate risks before global regulators devise their own and make them compulsory. He said progress had been made by many of the largest banks and energy companies to harmonise how they report their risks, but added: “Progress in both quantity and quality is uneven across sectors”. Speaking in Tokyo at a conference held by the Taskforce on Climate-related Financial Disclosures (TCFD), he stated there was an appetite among investors to support companies that understand their climate risks following research that showed they were likely to expand at a faster rate. The aim is to develop a series of rules governing how companies report the effect of warming temperatures on their businesses alongside data showing the contribution of their activities to the problem. This will support investors to back companies that are building a climate-friendly infrastructure. (The Guardian)

London and Hong Kong-listed bank Standard Chartered has launched the first retail banking product in Asia that directly supports the United Nations’ Sustainable Development Goals (SDGs). For retail clients, the bank is offering a promotional rate of 1.9 percent interest and priority banking clients getting a rate of 2 percent. Liquidity raised will be used to finance climate-friendly projects, small and medium-sized enterprises in developing countries, undertake microfinance and provide funds for a variety of sustainable projects. Through its research, the bank chose Singapore as its Asia launch pad as found it has the highest number of high net worth investors in Asia who are interested in sustainable investing. The product, which was developed with sustainability consultancy Sustainalytics, has been launched under Standard Chartered’s new green product framework and comes six months after it was made available to the bank’s European clients.  The framework sets the basis for future sustainable products to help fund the SDGs across the bank’s footprint markets, especially in developing countries. (The Straits Times; Eco-Business)

BlackRock, the world’s largest asset manager, has launched its first circular economy fund as part of a new partnership with the Ellen MacArthur Foundation designed to drive investment in the circular economy. The new partnership marks one of the first moves by a major investor to specifically target the expanding circular economy sector, which works to bolster resource efficiency and introduce new business models that enable circular resource flows. BlackRock said its BGF Circular Economy Fund aims to drive investment in companies contributing to or benefiting from circular economy activities, excluding investments in the coal sector and oil and gas producers. The new fund is the latest in a series of moves by BlackRock designed to increase its exposure to green sectors and pressure companies to demonstrate a “purpose” beyond maximising profits. However, the investment firm has drawn controversy for publicly supporting climate action while voting against climate-related shareholder proposals, when its interventions would have carried the proposal through. (Business Green)

PepsiCo has priced its first ever green bond at $1 billion, which will be used to fund initiatives to reduce plastic content in packaging, improve supply chain engagement and management and boost water stewardship. The green bond will assist the company’s new target to reduce the use of virgin plastic across its portfolio by 35 percent by 2025, which will eliminate around 2.5 million metric tonnes of the material from circulation. The target, measured against a 2018 baseline, builds on existing goals to make 100 percent of PepsiCo’s packaging recyclable, compostable, or biodegradable; and increase its use of recycled content in plastics packaging to 25 percent, agreed as part of the firm’s commitment to the UK Plastics Pact. The green bond is led by investment bank, Morgan Stanley, which launched a dedicated plastics financing platform earlier this year. The Morgan Stanley Institute for Sustainable Investing’s Plastic Waste Resolution is aimed at engaging all stakeholders to develop and scale solutions that negate the impacts of plastics waste. (edie)

Thirty of the world’s largest cities, including London, New York and Copenhagen, have now reached a peak in their greenhouse gas emissions, according to new analysis which has examined the climate actions of cities aiming to curb emissions by 2020. The C40 Cities Climate Leadership Group, which consists of 94 cities aiming to lead on climate action, has revealed that the 30 members have reduced greenhouse gas emissions by an average of 22 percent. The news comes at the start of the C40 World Mayors Summit in Copenhagen, where city leaders will come together to debate further action to curb emissions. Cities have identified a reduction in emissions by encouraging more sustainable transport options and switching to renewable electricity sources. However, many of the C40 network are cities in industrialised countries where there is considerable political focus on decarbonisation. Experts state encouraging developing nation cities to decarbonise will be tough but offers huge rewards in development and reducing emissions as emerging economies ‘leapfrog’ pass high carbon infrastructure. (edie)