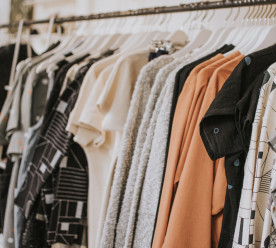 Fashion giants including Nike, H&M, Armani and Chanel have signed onto an agreement intended to curb the apparel industry’s environmental impact. The pact, spearheaded by Gucci-owner Kering and a French environmental ministry, is one of several private-sector accords set to be unveiled as President Emmanuel Macron prepares to host the G7 summit, which takes place this weekend in Biarritz, France. Companies signing the pact produce nearly 150 brands and represent more than 30 percent of the fashion industry’s output by volume. The brands agreed to targets including elimination of disposable plastic packaging by the end of the next decade, becoming carbon-neutral by 2050 and transitioning to 100 percent renewable energy by 2030. Fashion is responsible for roughly 8 percent of the world’s carbon emissions, a 2018 Quantis report found — as well as water pollution from fabric dyes, chromium used to tan leather, and pesticides from growing cotton. (Bloomberg*)

A new report from the Economist Intelligence Unit (EIU) has called on policymakers to place water stewardship at the heart of regional and bilateral policy decisions to create various economic, environmental and societal benefits. The EIU’s Blue Peace Index 2019, developed with support from the Swiss Agency for Development and Cooperation, analysed 24 countries across five transboundary river basins on 74 qualitative and quantitative indicators. Transboundary river basins provide more than half of the world’s freshwater flow and 40 percent of the global population are in these areas. The report found that integrating water-based decisions into policy discussions could create a range of shared benefits between nations. It also presented that shared institutions and legal frameworks should be introduced for transboundary river basins in a bid to resolve issues as they arise peacefully. The benefits of doing so range from reduced flooding and drought, protected biodiversity, enhanced energy security and optimisation of investments. (edie)

Hasbro will phase out plastics from packaging of toys

Toy company, Hasbro, is vowing to cut down on the plastic components used to package those products. The company will start phasing out plastic from new packaging, including elastic bands and shrink wrap, from next year, with a plan to eliminate virtually all plastic from packages for new products by the end of 2022. The company has not yet announced a plan to cut down on plastic usage in the toys themselves, though Chief Operating Officer, John Frascotti, said the company will soon announce steps involving more sustainable materials. However, there are some places Hasbro won’t be able to replace plastic due to health and regulatory rules. For example, packaging for Easy Bake Oven ingredients will remain wrapped in plastic to keep the food tamper-proof and fresh. Consumer companies are facing an increasing backlash to single-use plastics, with major corporations from PepsiCo Inc. to Procter & Gamble Co. vowing to cut back. (Bloomberg*)

British supermarket, Iceland, has captured and recycled more than one million plastic drinks bottles since it began offering reverse vending in May 2018. Launched to show the company’s support for the implementation of a nationwide deposit-return scheme, the trial installed deposit banks across four stores and since has added more locations. The reverse-vending units accept any of the chain’s own-brand beverage bottles and repay users with a 10p voucher to be used in-store. In a survey, 75 percent of respondents said they would support a national deposit return scheme for plastic drinks bottles if the deposit was set at 20p per container, the same rate set for Scotland. The government is exploring two variants of the system to roll out in 2023, which will operate for cans, plastic and glass bottles. It will form a key part of the Government’s Resources and Waste Strategy (RWS), which also details major overhauls to household waste collections and the Extended Producer Responsibility (EPR) system. (edie)

A railway line in Aldershot, UK, has become the first in the world to be supplied with green power. The Aldershot railway now links around 100 solar panels to an ancillary transformer on the railway’s traction systems, with electricity used to power signalling and lights. Working in conjunction with Network Rail and Community Energy South, the project aims to assess whether solar electricity can bypass the grid and be piped straight to lineside equipment safely and efficiently. The Riding Sunbeams project, by climate charity 10:10, is exploring the potential of using solar to power parts of Britain’s railways. Research by 10:10 released in 2017 suggested track-connected solar arrays and on-site energy storage could directly supply around 10 percent of the energy needed to power trains on the UK’s direct current electrified routes each year. Networks in South London are thought to have the most potential with space for 200 solar farms which would provide up to 15 percent of power needs. (Business Green)