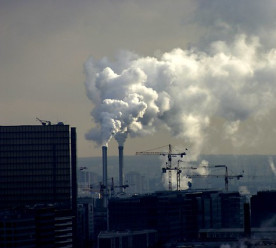 A group of citizens is suing the Indonesian government, including the president, over the poor air quality in Jakarta, which has been ranked as the worst in the world. The lawsuit, filed by the group calling itself the Jakarta Advocacy Team, holds seven top government officials liable for the problem, including President Joko Widodo and Jakarta Governor Anies Baswedan. Among their demands, the activists want a comprehensive research-based plan to reduce air pollution, similar to what the Chinese government implemented in 2014 when it ‘declared war’ on air pollution and unveiled an action plan to improve overall air quality across the country within five years. Indonesia’s Ministry of Environment and Forestry said the activists were within their rights to file a suit but questioned the air quality data they presented. Jakarta has repeatedly been ranked as the world’s most polluted city, with levels of PM2.5, a fine particulate matter deemed harmful to human health, reaching “unhealthy” concentrations. (Eco-Business)

RB to pay $1.4 billion in US opioid penalty settlement

British health product producer, RB, has agreed to pay up to $1.4 billion to US authorities in the largest penalty linked to the country’s opioid crisis. The settlements with the Department of Justice and the Federal Trade Commission resolve investigations into how a former subsidiary marketed a drug used to treat addiction to painkillers. US authorities allege that the business — which RB owned until 2014 — made unsubstantiated claims about a new version of an anti-addiction drug, Suboxone. RB spun out the subsidiary in 2014 into a separate UK-listed company called Indivior. The decision comes three months after a federal grand jury indicted Indivior and sought from it at least $3 billion in fines over allegations that it sought to drive up sales of Suboxone with a fraudulent marketing scheme. RB’s settlement is the single biggest so far in the opioid crisis according to the Centers for Disease Control and Prevention, covering alleged misconduct stretching from 2006 to 2015. Despite the settlement, RB denies acting illegally. (Financial Times)

Some of Europe’s largest airlines have criticised efforts to discourage Europeans from flying, arguing the industry was making huge strides in cutting its carbon footprint and that there was no shame in air travel. The share prices of Europe’s largest airlines fell this week when France announced a tax on air travel, the latest move by an EU government to discourage flying in attempt to reduce emissions. The Airlines for Europe (A4E) lobby group, which includes the continent’s largest airline groups, Lufthansa (LHAG.DE) and British Airways owner IAG (ICAG.L) has been outspoken in defending airlines from environmental criticism. As chairman of the lobby group, Ryanair chief executive Michael O’Leary argued that aviation has roughly halved the carbon footprint per flight over the past three decades and is spending billions of euros in more fuel-efficient aircraft. However, not all airlines are in agreement. Last week, Dutch airline KLM issued an open letter urging the aviation industry, as well as individual travellers, to create a more sustainable future for generation.  (Reuters)

The UK’s energy system operator, National Grid, has predicted that by 2050 millions of electric vehicles (EVs) will use wind and solar power to charge up within minutes to act as battery packs for when the grid needs more energy. The grid operator’s long-range energy forecasts predict that smart charging systems will use algorithms to help cars balance demand and supply on the grid, while making the most of renewable energy and saving customers money. It found that the plug-in car fleet could hold a fifth of the electricity produced by the UK’s solar panels, which it predicts will quadruple over the same period. National Grid predicts this scenario would make the UK’s ambitious target to cut emissions to net zero by 2050 achievable because it helps cut carbon from the energy and transport sectors. The news comes as North East clean tech innovator, Hyperdrive, today announced its efforts in strengthening the UK’s EV infrastructure with a major new battery manufacturing facility in Sunderland to meet surging demand for EVs and energy storage systems. (Guardian; Business Green)

England could enjoy a £2 billion economic boost over 10 years from rolling out a comprehensive recycling system enabling consumers to take back used glass bottles, plastic bottles, and drinks cans in return for a small payments or incentives, according to a report by the Campaign to Protect Rural England (CPRE). Additionally, the introduction of an “all-in” deposit return scheme (DRS) allowing every drinks can and bottle, whether made from either plastic or glass, to take part in the scheme could prove up to eight times more effective than rolling out a less comprehensive, watered-down system, the group claimed. The gains would come from reduced pollution, lower clean-up costs, and carbon emissions savings, as the use of recycled materials to produce new drinks containers, CPRE said. However, opting for the less comprehensive DRS system proposed by Defra, which does not seek to capture as many materials, would only result in a fraction of the financial boost at £250 million over 10 years. (Business Green)