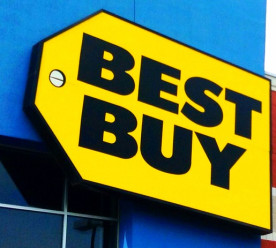 American consumer electronics retailer, Best Buy, has announced a Science-Based Target (SBT) to help consumers reduce their carbon emissions by 20 percent and save $5 billion on utility costs. SBTs are an emissions target, scientifically calculated to align with the goal of the Paris Agreement to limit warming to 2C. Best Buy’s commitment to SBTs is unique due to its strategy to make customers part of the equation – the company will reduce its total carbon footprint by selling more energy efficient products to customers. Best Buy says it will help consumers reduce emissions by putting greater emphasis on energy-saving devices. In its own operations, Best Buy has committed to reduce carbon emissions 75 percent through efficiencies from renewable energy sources, LED lighting and a hybrid vehicle fleet; as well as investments in on-site solar panels, solar farms and Renewable Energy Credits. (Sustainable Brands; Business EDF)

British retail bank HSBC today launched a scheme to help victims of modern slavery and human trafficking in Britain “rebuild their lives” by giving them access to bank accounts. The bank said it had been working with law enforcement and charities to identify people who have escaped slavery and trafficking to whom it can offer its “Survivor Bank” service. Banks usually require proof of address and identity documents, like passports, to open accounts, which can exclude victims of slavery and trafficking who may have had these documents confiscated or live in safe houses. The service is believed to be the first of its kind in Britain and could potentially be expanded to other countries. Trained staff in 18 of HSBC’s UK branches in areas identified as having “high potential need”, including London, Birmingham and Manchester, will help the victims set up current accounts. Survivor Bank will be offered to people who have been identified through the UK government’s ‘National Referral Mechanism’ (NRM), a scheme that identifies victims and gives them support. (Thomson Reuters Foundation)

Health and beauty retailer Boots has started to replace plastic bags with brown paper bags in an attempt to cut down on their use of single-use plastic. The retailer is also introducing bleached paper dispensing bags for prescriptions. However, prescriptions assembled at its central pharmacy will still be sent out in plastic packaging, a practice that has been criticised by customers. Boots says these plastic prescription bags need to be durable and the plastic is recyclable. The new paper bags will initially be available in 53 of its 2,485 stores, with all of Boots’ outlets using paper by early 2020, and are aimed at customers who have not brought their own bag. Money raised from selling the bags to customers will go to charity. Boots UK signed up to the UK Plastics Pact last year and said at the time it was “committed to reducing single-use plastic”. (BBC)

Peru has become the first country to implement American food and beverage multinational PepsiCo’s ‘Recycling with Purpose’ circular economy model. The program was announced earlier this year as one that would be rolled out in 10 countries over the next two years. Peru is the first to put the PepsiCo program into place, complete with a consumer engagement program and a push to involve grassroots recyclers to strengthen local recycling. PepsiCo has been actively involved in the recycling arena in Latin America and describes Recycling with Purpose as a circular economy model. PepsiCo Latin America has a long-standing partnership with the non-governmental organization Ciudad Saludable, a catalyst of the recycling ecosystem in Peru. Since 2008, Ciudad Saludable, with PepsiCo’s support, has trained 3,162 grassroots recyclers and 210 public workers, reaching 22 municipalities with access to environmental management tools. By 2021, the company expects Recycling with Purpose to be operating in 10 countries in Latin America. (Environmental Leader)

Polish energy groups could invest in renewable power in Western Balkan countries that eye European Union membership, Jadwiga Emilewicz, minister for entrepreneurship and technology has said. Poland backs the EU bids of the Western Balkan nations, including Serbia, which is Warsaw’s biggest trade partner in the region, as well as North Macedonia, Bosnia and Herzegovina. Poland’s state-run energy groups could invest in green energy projects such as wind and solar in these countries, the minister said. Poland still produces most of its energy from coal but its energy companies are beginning to consider projects for more renewable sources of power. State-run utility company Tauron said in May it plans to replace most of its coal-burning power plants with renewable sources in the next decade to adjust to EU climate policies and secure future financing. (Reuters)