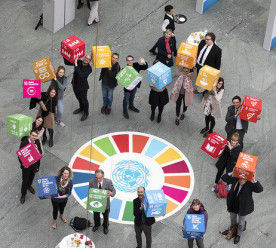 Bank of England calls on Lloyd’s to tackle sexual harassment

The Bank of England (BOE) has called for Lloyd’s of London to demonstrate progress in tackling the insurance market’s culture of sexual harassment. The BOE’s director of insurance supervision, Anna Sweeney, said she would work together with the Financial Conduct Authority to ensure that Lloyd’s investigates instances of harassment and seeks to end sexual misconduct in the market. The demand for action is in response to a series of Bloomberg articles that have revealed the extent of sexual harassment and bullying among the companies that work in the world’s largest insurance market.  A Lloyd’s spokesman said the corporation had introduced a series of measures to stamp out sexual misconduct in the market by introducing bans for inappropriate behaviour. The corporation that runs the Lloyd’s market has also established an independent hotline for whistleblowers and committed to holding a survey of people working in the market. (Bloomberg)

Financial index provider MSCI Inc. has expanded its range of climate indexes to help investors navigate and measure the investment opportunities and risks associated with the transition to a low carbon economy. The new MSCI ‘Climate Change Indexes’ are part of a toolkit to help investors build more climate resilient portfolios and integrate climate risk considerations in their global equity investment process, through a rules-based re-weighting methodology. The indexes re-weight securities based on MSCI’s Low Carbon transition score, which consistently measures a company’s exposure to low carbon transition risk, carbon emissions and fossil fuel reserves, and its exposure to opportunities including alternative energy and clean technology. The Indexes aim to increase exposure to companies providing solutions to address climate change, with twice the exposure to clean technology companies when compared to the underlying benchmark. The indexes also give four times less exposure to companies with carbon intensive products than the underlying index. (The Asset)

The United Nations Global Compact will next week launch a series of events to accelerate progress on the Sustainable Development Goals (SDGs) at the national level. Organized as part of the UN’s ‘Making Global Goals Local Business’ campaign, these events will offer an opportunity for private sector leaders to share best practices and learn from others operating in the same business environment. Starting on Monday in London, the series will also feature events later this year in Canada, Indonesia, Lebanon, Mexico, Sri Lanka (co-hosted with Bangladesh, India, Nepal and Pakistan) and Tanzania (co-hosted with Kenya). Each event will be organized by a Global Compact Local Network. Collectively, these events will be an opportunity for the private sector to play a leading role in advancing the SDGs. In the UK, the focus will be on solutions to finance the SDGs, with speakers including Lise Kingo, Sir Mark Moody-Stuart, Chairman of the Foundation for the Global Compact and Paul Simpson, CEO of CDP, along with business leaders from BT, Hermes Investment, HSBC, Unilever and several other companies. (3BL Media)

A collection of more than 30 organisations across the UK’s food and drink supply chain have urged UK Ministers to bolster policies around long-term decarbonisation, climate resilience and resource efficiency for the sector. In a new framework entitled ‘A Recipe for Growth, Prosperity and Sustainability: the UK Food and Drink Industry’s Plan for Success’, the Food and Drink Federation sets out a string of industry-led recommendations for the upcoming National Food Strategy. Under a central call for more “joined-up” and “holistic” policy frameworks, the document urges greater policy signals to support the sector’s progress towards Climate Change Act targets, including those to help decarbonise heat and maintain “clear” carbon pricing. The Federation’s recommendations suggest that innovation will play a key role in the food and drink sector’s low-carbon transition. They include a request for the sector to receive more support through programmes such as the Industrial Strategy Challenge Fund, in order for the solutions to feeding 10 billion people worldwide by 2050 to be developed and scaled up. (Edie)

The Trump administration is continuing to weaken US climate policy by overhauling rules for power plant emissions to try to help the coal industry. The Environmental Protection Agency’s (EPA) ‘Affordable Clean Energy’ (ACE) rule is intended to comply with legal requirements to control carbon dioxide emissions from electricity generation while minimising intervention in the industry. The new rule pushes coal-fired power plants to become more efficient, which could mean they will run more often and for longer, helping support US demand for coal. States including New York and environmental groups are promising to challenge the new rules in court. Under Trump, the EPA is taking a minimalist view of its requirements under the Clean Air Act to curb carbon dioxide emissions, saying it can impose curbs only on individual plants. Critics of the new rule, including Conrad Schneider of the Clean Air Task Force, believe the EPA’s change of approach was driven by Trump’s hopes of reviving the US mining industry, rather than any real attempt to control emissions. (Financial Times)*

Image Source:  The United Nations in Germany by Stand Up Campaign on Flickr. CC BY-ND 2.0