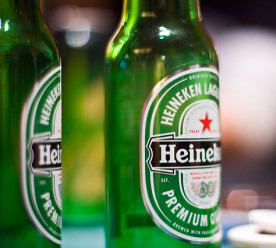 Multinational brewer Heineken has increased its water sustainability ambitions, pledging to reduce its water usage as well as replenish and treat all the water it uses for brewing in water stressed areas around the world by 2030. The brewing giant said its 2030 ‘Every Drop’ strategy, announced on Monday, had been developed in support of UN SDG 6 which is dedicated to water protection. Under the strategy, the multinational brewer pledged to fully balance and replenish every litre of water used in its products from areas that are water-stressed, as well as to work collaboratively with other users of local water resources to protect human health and boost communities. It also promised to maximise recovery, reuse, and recycling of its water, and to treat 100 percent of its wastewater worldwide. Heineken also set several targets to reduce its water usage to an average of 3.3 to 2.8 hectolitres for its breweries in water stressed areas, and from 3.5 hectolitres to 3.2 on average for all its breweries worldwide. (Business Green)

PepsiCo has launched an initiative to promote recycling across Latin America and the Caribbean using consumer incentives and rewards programs. Called “Recycling with a Purpose,” the program will be expanded to 10 countries in Latin America over the next two years, the company says. The program has three components: a consumer incentive approach that helps educate and involve consumers in recycling; partnerships with civil society organizations that promote inclusive recycling; and efforts to strengthen the local recycling industry. PepsiCo says the program supports its global commitment to building “a world where plastics need never become waste.” Within the consumer incentive approach, PepsiCo Latin America is partnering with ecoins, an initiative that was founded in Costa Rica that aims to increase the collection of PET materials. The program allows consumers to exchange their plastic materials for ecoins, a virtual currency, which they can then use to earn discounts on a variety of products and services. (Environmental Leader)

After years of criticism, Facebook announced on Tuesday that it would stop allowing advertisers in key categories to show their messages only to people of a certain race, gender or age group. The company said that anyone advertising housing, jobs or credit — three areas where federal law prohibits discrimination in ads — would no longer have the option of explicitly aiming ads at people on the basis of those characteristics. The changes are part of a settlement with groups that have sued Facebook over these practices in recent years, including the American Civil Liberties Union, the National Fair Housing Alliance and the Communications Workers of America. They also cover advertising on Instagram and Messenger, which Facebook owns. The company said it planned to carry out the changes by the end of the year and would pay less than $5 million to settle five lawsuits brought by the groups. (New York Times)

Australia puts chance of El Niño in 2019 at 70 percent

A recent warming of the Pacific Ocean has led to a 70 percent chance of an El Niño weather event developing this year, Australia’s Bureau of Meteorology said on Tuesday. An El Niño weather event can trigger both floods and drought in different parts of the world, and is associated with warmer, dry weather across the Asia Pacific. Australia’s weather bureau earlier this month pegged the chance of an El Niño developing at 50 percent. El Niños are particularly damaging to Australia, with the last one in 2015/16 cutting farm production in the country – among the world’s largest exporters of agricultural products. Australian farmers will within weeks begin sowing wheat crops and adverse weather could curtail production in the world’s fourth-largest wheat exporter. A U.S. government weather forecaster last week upped its expectation of weak El Niño conditions persisting through the northern hemisphere spring to 80 percent, from 55 percent previously. (Reuters)

A majority of people living in developed countries want their government to increase taxes on the rich in order to help the poorest in society, according to a major global study. In all 21 countries included in the OECD study, more than half of those polled said they were in favour when asked: “Should the government tax the rich more than they currently do in order to support the poor?” The OECD said the survey of 22,000 people was “deeply troubling” and revealed that nearly 60% of respondents do not think they are getting their “fair share” back for the taxes they pay. Only one in five people thought that they would easily be able to access state benefits in the event of a crisis, with many raising concerns about healthcare. Almost six in 10 said their government ignored their views and concerns. The survey comes as politicians and campaigners across the world call for higher taxes on the super-rich to fund essential services for the poor. (Guardian)