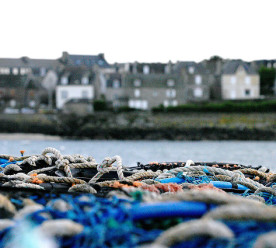 Some New Zealand companies are weighing whether to advertise on social media, as two industry groups urged them not to in the wake of last week’s mass shooting in Christchurch that was livestreamed on Facebook and redistributed on other platforms. The Association of New Zealand Advertisers and the Commercial Communications Council asked all advertisers on Monday to consider where they place their ads and challenged Facebook and other platform owners to take steps to moderate hate content. “Businesses are already asking if they wish to be associated with social media platforms unable or unwilling to take responsibility for content on those sites,” the two groups said in a joint statement. Media representatives from Facebook and Alphabet Inc’s Google did not immediately respond to emails seeking comment. ASB Bank, one of the country’s biggest banks and a unit of Commonwealth Bank of Australia, is in talks on whether to pull its ads from social media, a spokesman said. (Reuters)

DNA barcoding of more than 1,400 seafood products certified as sustainable by the Marine Stewardship Council (MSC) has revealed that less than 1% were mislabelled, compared with an average of 30% across the sector as a whole. Hi-tech eco-labelling of certified fish products has been proven to be effective in stamping out seafood fraud across the world, according to research published on Tuesday. The peer-reviewed findings, in the journal Current Biology, suggest that the MSC’s eco-labelling and monitoring of the supply chain are an effective deterrent to fraud. The MSC is the international NGO that sets the standard for sustainable fishing around the world and its blue label – on products in store, on fresh fish counters and on restaurant menus – indicates that seafood has been sustainably caught and traced back to its source. More than 300 fisheries in over 34 countries are certified to the MSC’s standard and more than 35,000 seafood products worldwide carry the label. (Guardian)

Toyota and the Australian Renewable Energy Agency (Arena) will provide $7.4 million to transform part of the carmaker’s decommissioned car manufacturing site in Altona into a commercial-grade hydrogen production and refuelling site. The new centre will demonstrate the processes required to produce hydrogen from renewable sources through electrolysis, and then the subsequent compression and storage. Arena says the centre, once operational, will produce at least 60kg of renewable hydrogen each day, with onsite solar PV and battery storage providing electricity to support the energy requirements of the project. Hydrogen is being promoted as a replacement for natural gas and is being used overseas in the transport sector and in electricity generation. The president and chief executive of Toyota Australia, Matt Callachor, says the new centre on the Altona site will contribute to the carmaker meeting its target of zero CO2 emissions from sites and vehicles by 2050. (Guardian)

Ahead of a deadline to release gender pay-gap numbers in Britain, Goldman Sachs said on Monday that it is boosting its efforts to improve diversity at the investment bank, setting goals for the first time for hiring black and Latino associates and saying it will tie top leaders’ pay and promotions to their progress on those goals. In a memo to employees on Monday, chief executive David Solomon said the bank was expanding a year-old goal of 50 percent female recruitment in the crop of analysts it picks from college campuses each year. It will now include in that goal people hired laterally into entry-level jobs and set goals for several diverse groups. In addition to having women make up half of all incoming Goldman analysts and entry-level associates — representing 70 percent of the bank’s annual hiring — the bank aims to have 11 percent of those recruits be black and 14 percent be Hispanic/Latino in the Americas. (Washington Post)

German supermarket chain Aldi has pledged to remove plastic glitter from 100 percent of its own-brand products by 2020. Despite its metallic appearance, most glitter is made up of tiny pieces of plastic, which can end up in the water where they are difficult to break down. The glitter phase-out will cover all of Aldi’s own-brand non-grocery lines sold in UK stores, including greetings cards, wrapping paper, seasonal decorations and art and craft supplies. It will see the glitter previously used in these products and their packaging removed altogether or replaced with a biodegradable alternative. The commitment will cover all of Aldi’s 825 UK stores, 130 Ireland stores and the 65 new stores the retailer is opening across these two markets this year. Other retailers such as Waitrose & Partners recently pledged to remove glitter from all its own-brand lines by the end of 2020, while Next, Debenhams, Sainsbury’s, Marks & Spencer (M&S) and Paperchase have all committed to reduce their use of plastic glitter. (Edie)