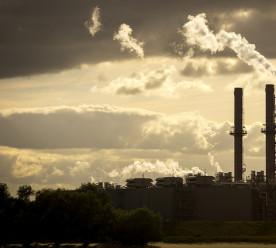 Anglo-Australian mining company Rio Tinto said on Monday it would recommend that shareholders vote against a resolution requiring the miner to report its direct emissions and those of its customers in greater detail. Rio Tinto, which released its own climate change report last month, advised voting against the plan because it was not in control of its customers emissions, and because an analysis it was currently undergoing was based on a different framework. “Scope 3 emissions are primarily the emissions of our customers, mainly steel makers in China, over which we have very limited control.” The emissions resolution was submitted by Melbourne-based non-profit Market Forces, acting as agent for 109 shareholders who hold approximately 0.02 percent of the Australian listing. “By recommending shareholders vote against this resolution, Rio Tinto has failed to take the opportunity to assure shareholders that its new emission reduction targets will be entirely consistent with the climate goals set out in the Paris Agreement,” said Will van de Pol from Market Forces. (Reuters)

Ford will cut at least 5,000 jobs in Germany and an undetermined number in the UK as part of a plan to turn round its struggling operations in Europe. The cuts were unveiled on the same day the US carmaker announced that chief executive Jim Hackett had received a pay package worth $17.8 million last year, up from $16.7 million a year earlier, despite the carmaker’s profits halving during the year and a 40 percent fall in its share price. Mr Hackett has vowed to get to grips with Ford’s non-US business, with plans to turn round Europe, Latin America and China in an $11 billion global cost-cutting programme. Last year the company saw profits halve, as poor performance outside of the US dragged down otherwise-strong results from the company’s heartland. It plans to lay off thousands of workers, restructure its business and reduce its vehicle line-ups in an attempt to return to profit in the region, where it lost $400 million during 2018. (Financial Times)*

Malaysia on Saturday threatened to bring a World Trade Organization challenge if the European Union goes ahead with recommendations to phase out palm oil from transport fuel used in the bloc. In a list of criteria published last week, the European Commission concluded that palm oil cultivation results in excessive deforestation and its use in transport fuel should be phased out. Malaysia’s foreign ministry described the recommendation as a “calculated political act” aimed at removing its palm oil exports from the EU marketplace. “Such an aggressive trade barrier targeted at Malaysia’s national interests, and our 650,000 small farmers, cannot pass without a strong response,” the ministry said in a statement. Malaysia is the world’s second largest palm oil producer behind Indonesia. Both countries have been battling with EU governments and the EU parliament over attempts to curtail exports in a bid to address rampant deforestation linked to palm oil cultivation. (Reuters)

Italian multinational oil and gas company Eni SpA committed to eliminating all carbon dioxide emissions from its oil and gas exploration and production operations by the end of the next decade, in part by planting forests on a large scale. The Italian giant’s plan, which entails planting 20 million acres of forest in Africa, is the latest example of major oil companies bowing to pressure to do more to prevent runaway climate change. Its European peers Total SA and Royal Dutch Shell Plc have also set targets to reduce the carbon emitted from their own operations. The forests planted in South Africa, Zimbabwe, Mozambique and Ghana should be removing about 20 million tons a year of CO2 from the atmosphere by 2030, Eni said. That would offset residual emissions from the company’s upstream business, which it also plans to reduce through greater operational efficiency and minimizing waste. Eni will spend about $1.1 billion on “circular economy” initiatives such as these over the next four years. (Bloomberg)

Europe’s largest independent Coca-Cola bottler used 27.6% recycled content in its plastic bottles last year – more than ten times the beverage sector’s global average proportion of 2-3%. The progress was posted in Coca-Cola European Partners’ (CCEP) first integrated annual report, which also tracks the beverage giant’s progress on water conservation, carbon reduction and improving the nutritional portfolios of its products. Published last week, the report states that CCEP is on track to achieve its 2025 goal of making all PET bottles with at least 50% recycled content. To secure a continuous and secure supply of recycled PET (rPET), the firm has made several investments into recycling infrastructure improvements and closed-loop innovations. A key step for CCEP in this space was securing a deal with rPET supplier Loop Industries, which uses patented technologies to restore plastic streams contaminated by dyes to ‘near-virgin’ quality. (Edie)