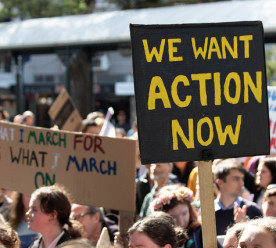 Royal Dutch Shell said on Thursday it planned to reduce carbon emissions from its oil and gas operations and product sales by 2 percent to 3 percent during the 2016-2021 period, the first time the company has issued carbon footprint targets. The targets, which will be linked to executive pay, aim to cut greenhouse gas emissions from its oil and gas extraction and refining as well for fuels and other products sold to millions of customers, known as Scope 3 emissions. The targets will be linked to the remuneration of around 150 executives in 2019, and expanded to 16,000 employees next year. The Anglo-Dutch company last year announced an “ambition” to halve its carbon footprint by 2050 by increasing its output of lower-carbon products including natural gas, biofuels, electricity and hydrogen. Rivals BP and Total have already set short-term targets on reducing carbon dioxide emissions, but those planned cuts are limited to their own operations and exclude Scope 3 emissions. (Reuters)

Young people are preparing for a mass walkout of classes on Friday, to demand swift action from governments to safeguard their futures. At time of publication, 1,209 events had been registered across 92 countries with the German movement Fridays for Future. “The situation we are facing today is a unique one,” Linus Steinmetz, spokesperson for Fridays for the Future said. “We are the last generation to have a realistic chance to prevent a climate catastrophe. According to the IPCC, we have less than 12 years to deliver the changes required to avoid this, but we do have the means.” The school strikes for climate were initially spurred by the solo protests of Swedish 16-year old Greta Thunberg who started a weekly vigil on the steps of the parliament in Stockholm to call for faster action to cut greenhouse gas emissions. Some commentators have criticised the movement for encouraging children to skip school. The strikers, who are mostly too young to vote, argue it is the only way to make their voices heard. (Business Green)

The Dutch government announced on Wednesday a carbon tax for companies after a top advisory body said current plans to cut emissions will fall short of targets. Proposals to fight climate change put forward in recent months will cost the Netherlands around €5.2 billion ($6 billion) over the next decade, but will fall short in achieving a 49 percent CO2 emission reduction goal by 2030, the Netherlands Bureau for Economic Policy Analysis (CPB) advisory body said. The Dutch government is expected to decide by the end of April on a climate change policy program after the consultation led to a series of measures proposed by businesses, activists and other groups. Prime Minister Mark Rutte said these plans will include a tax on CO2 emissions for corporations, on top of the European Union’s current Emissions Trading System, to stimulate more efficient technologies and to make sure companies pay a fair share of the costs of the energy transition. (Reuters)

Women across the economic spectrum are more vulnerable than men to losing their jobs to technology, according to a study released by the Institute for Women’s Policy Research. Among the positions with more than a 90 percent chance of becoming automated were administrative assistant, office clerk, bookkeeper and cashier, all fields dominated by women. Drawing on data from the Bureau of Labor Statistics and research examining the possibility of automation based on current technology, the authors found that 58 percent of at-risk workers were women. Researchers noted that while women work in the positions most likely to be automated, they also dominate those at lowest risk for automation, such as childcare and nursing. These care positions tend to pay $20,000 to $25,000, an annual salary below the poverty line for a family of four and far less than the salaries of male-dominated positions that are not at risk of automation, including executives and legislators. (Thomson Reuters Foundation)

Under the partnership announced yesterday between Swedish furniture giant IKEA, shipping group CMA CGM, the Port of Rotterdam and non-profit the GoodShipping Program, the first container ship will refuel with the new biofuel on March 19. The container ship will become the first in the world to test a new sustainable marine biofuel next week, in a refuelling event being hailed as a “major step” towards the decarbonisation of ocean freight. The biofuel took three years to develop by GoodFuels, and is made from ‘forest residues’ – waste from paper and pulp production – and waste cooking oil. It is expected to cut CO2 emissions by up to 90 percent and “virtually eliminate” sulphur oxide emissions compared to standard marine fuel, without requiring any modifications to ship engines. Organisers of the biofuel pilot say they hope the move will help demonstrate the scalability of waste-based marine biofuels and spur “development of realistic options to curb greenhouse gas and sulphur oxide emissions from shipping.” (Business Green)

We’re pleased to announce that Corporate Citizenship’s Regional Director for North America, Abby Davidson, will be facilitating the closing keynote on ‘Moving from risk to opportunity’ with from Cummins, Shift and TerraCycle.