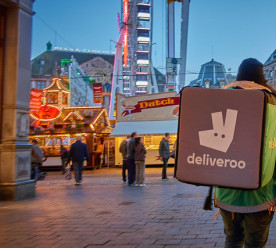 The Independent Workers Union of Great Britain (IWGB) has reignited controversy over Deliveroo’s employment practices, arguing that the takeaway app’s new data protection obligations undermine the right of couriers to appoint substitutes. Deliveroo narrowly avoided demands for union recognition and workers’ rights last year, after giving couriers the option of substituting people to deliver food on their behalf. Deliveroo’s terms say that couriers have the right to arrange for a substitute without prior approval from the company. But under the UK’s Data Protection Act, which translates GDPR into UK law, Deliveroo is ultimately responsible for keeping customer data safe and would need to be informed when a courier appointed a substitute on this basis. “This sounds like Deliveroo has an absolute right to refuse consent to the use of a substitute by a Deliveroo rider,” said Jason Moyers-Lee, general secretary for the IWGB. “I think it’s virtually impossible for Deliveroo to be compliant with [the GDPR] and labour law at the same time, given how they say their model operates”.  (Financial Times)

Global carbon tax in isolation could ‘exacerbate food insecurity by 2050’

The implementation of a global tax on greenhouse gas emissions could – without other complementary policies – “have a greater negative impact on global hunger…than the direct impacts of climate change”, a new study says. The study, published in Nature Climate Change, zooms in on how implementing a uniform tax on greenhouse gas emissions from agriculture and other types of land use, in particular, could impact food security worldwide. The introduction of a carbon tax could threaten food security in three main ways, the researchers say. First, the tax would raise the cost of food production, especially for carbon-intensive products such as meat. Second, the tax would raise the costs associated with agriculture expansion, which would lead to higher land rents. Third, the tax would incentivise the production of biofuels – which would compete with food crops for space, further driving up land rates. The scientists say the findings “should not be interpreted to downplay the importance of future GHG emissions mitigation efforts”. However, the results should highlight the need for policies alongside mitigation efforts, which could provide a safety net. (CarbonBrief)

A new survey has suggested that ordinary Australians want renewable energy to play a greater role in the country’s future. The poll, conducted by Reachtel on behalf of Greenpeace, asked 3,999 Australians about their views on clean technologies and the cost of energy. 66.7 percent of those surveyed felt that renewables, such as wind and solar power, should receive more government support than fossil fuels. A further 70 percent of respondents agreed that the government should “set an ambitious renewable energy target to help put downward pressure on electricity prices”. The poll was commissioned as a way to influence the debate around the Liberal government’s new National Energy Guarantee (NEG) policy. The NEG aims to provide the energy industry with certainty around what Australia’s future energy mix will look like; setting obligations on the level of on-demand and low-carbon power. (Climate Action Programme)

Chile has become the first South American country to legally ban the widespread commercial use of plastic bags. The new legislation, approved by Congress and enacted by President Sebastián Piñera, gives small shops two years to adapt to a total ban. Larger business will have six months to stop using plastic bags. In the meantime they will only be allowed to hand out two carrier bags per customer. Businesses that break the rules will face a fine of $370 (£280). Mr Piñera said the new rules were a great step for a cleaner Chile. “We want to go from a throwaway culture, where everything is used and chucked away, to the healthy culture of recycling,” he said. (BBC)

Waste management firm Veolia has announced it will increase the number of coffee cups it collects for recycling annually by 300%, by working with retailers such as Costa, Starbucks and McDonald’s on in-store collection services. “With a storm rightly brewing over disposable coffee cups in recent months, Veolia has responded by intensifying its efforts across the country to collect, sort and recycle millions of coffee cups which would otherwise be discarded,” Veolia’s chief technology and innovation officer Richard Kirkman said. The 300% increase in coffee cup collections builds on Veolia’s work to support Costa on its cup recycling programme, which aims to recycle up to 500 million coffee cups a year by 2020 – the equivalent of its entire annual sales of takeaway cups. (edie)