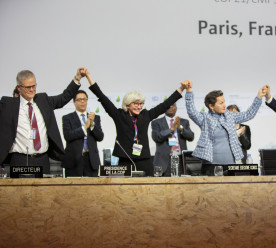 Global negotiations to implement the Paris agreement have been captured by corporate interests, according to a report released ahead of the second Conference Of Parties (COP23) to the Paris agreement next week. The report, co-authored by Corporate Accountability, uncovers a litany of ways in which fossil fuel companies have gained access to negotiations and manipulated outcomes particularly on finance, agriculture and technology. An example of the infiltration of polluters into the official negotiations includes the presence of a member of the World Coal Association and managers at Shell and EDF on the board of the UNFCCC’s Climate Technology Network, which advises on how to transfer green technology to the developing world. Member countries are soon expected to finalise the rule book that will determine how compliance will be monitored and enforced and how the developing world will receive finance and support. (Guardian)

The health of hundreds of millions of people around the world is already being damaged by climate change, a major report published in the Lancet journal has revealed. According to the findings, heatwaves have affected 125 million more people since 2000 and global warming is boosting the transmission of deadly diseases such as dengue fever, as mosquitoes and the virus can carry breed more quickly. The report involved 63 researchers from 26 institutions around the world, including the World Health Organization, World Bank and the UN’s World Meteorological Organization, which reported a record jump in the CO2 concentration in the atmosphere in 2016. Dr Toby Hillman, from the Royal College of Physicians, noted that the impacts of climate change are also affecting developed nations, a claim supported by a new study which found that 44 of 51 UK cities are breaching global air quality rules. (Guardian; Chicago Tribune)

GFG Alliance, an international group of businesses founded and owned by the British Gupta Family, has approved plans to deliver 1GW of dispatchable renewables assets to supply industrial sites in South Australia, following its acquisition of a 50.1% stake in Australian renewables developer ZEN Energy. The plans include 200MW solar PV plants, a battery project and a pumped hydro storage facility at a disused iron ore mine pit, while a further 480MW of solar capacity would be installed in “due course”. The plan would constitute the largest solar and storage project in Australia, mobilising AUS$700 million, and is part of a global green steel and aluminium strategy, which has seen the company invest in renewable projects in the UK. Clean tech giant Tesla is also pursuing a high profile energy storage project in the wake of a series of power blackouts. (Business Green; Guardian)

Executives from Facebook, Google and Twitter have appeared in court to publicly acknowledge their role in Russia’s influence on the presidential campaign, but showed little evidence that their platforms are immune to foreign powers. Democrats and some Republicans on a Senate Judiciary subcommittee complained that the companies had waited nearly a year to admit how many Americans were exposed to the Russian ads, with most pointed exchanges aimed at Facebook, which announced just before the hearings that more than 126 million users potentially saw the ads. Senators pushed for harsher remedies, including regulations akin to rules for political advertising on television. The companies acknowledged they were struggling to keep up with the threat of foreign interference. While they have not publicly opposed the proposed requirements to report on who funds political ads, lobbyists have privately praised voluntary disclosure. (NY Times)

Leading global palm oil supplier IOI Group of Malaysia has announced that it has launched three new labour policies that, if successful, could nudge other companies across the global palm oil supply chain to commit to fairer treatment of workers. The company said it will implement a “no recruitment fee” policy – a rallying outcry for human rights activists – and has pledged to require the recruitment agents to repay the workers or suspend their relationship. IOI also committed to pay all of its workers a minimum wage and overtime, and has promised a complete living wage assessment by the second quarter of 2018. Finally, the firm said it would not stand in the way of labour unions who seek access to the company’s palm oil plantations. Reactions to the announcements have been cautiously optimistic, recognising “solid and important commitments” that will have to be followed up with action. (Triple Pundit)

Image Source: Adoption of the Paris Agreement by UNclimatechange at Flickr. CC 2.0.