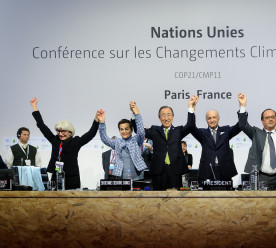 Business response to US pulling out of Paris Accord

Representatives of American cities, states and companies are preparing to submit a plan to the United Nations pledging to meet the United States’ greenhouse gas emissions targets under the Paris climate accord, despite President Trump’s decision to withdraw from the agreement. The unnamed group is negotiating with the United Nations to have its submission accepted alongside contributions to the Paris climate deal by other nations. So far the group members include more than 100 businesses, three governors and 30 mayors. Mr. Bloomberg the former New York City mayor who is coordinating the effort said that by redoubling their climate efforts cities, states and corporations could achieve, or even surpass, the pledge of the administration of former President Barack Obama to reduce America’s planet-warming greenhouse gas emissions 26 percent by 2025, from their levels in 2005. Mr Obama echoed these thoughts in a statement saying that “in the absence of American leadership…I’m confident that our states, cities, and businesses will step up and do even more to lead the way.” (New York Times)

There are 195 countries committed to reducing their greenhouse gas emissions as part of the 2015 agreement. Despite the U.S’ withdrawal from the Paris Accord, multinational companies will still need to follow strict emissions laws that other countries are adopting such as fuel economy and emissions standards for automakers. Disney CEO Robert Iger on Thursday said he quit the White House’s business advisory council over President Donald Trump’s decision to withdraw the U.S. from a sweeping, global climate-change agreement. Elon Musk, CEO of Tesla has also left the advisory council in protest. (ABS-CBN, Guardian)

Read more: Our recent blog, Stick with the program – corporate climate activism in the US

The world’s first commercial plant to suck carbon dioxide out of the air was opened yesterday in Zurich in what its creators are claiming is a “historic moment” for negative emissions technology. The Swiss Direct Air Capture (DAC) plant, powered by waste heat from a waste recovery site, draws out carbon dioxide from the atmosphere which is in turn used by a nearby greenhouse. The plant, developed by ClimeWorks, uses a specially designed filter to trap carbon dioxide out of the air, which is then isolated at a temperature of about 100 degrees Celsius. The captured gas is funnelled via an underground pipe to the greenhouses, where it is used to boost plant growth. Christoph Gebald, co-founder and managing director of ClimeWorks, said the technology could be easily scaled up and combined with underground CO2 storage to deliver a viable negative emissions technology. The advent of a commercially viable system for CO2 capture could prove a lifeline for the carbon capture and storage (CCS) sector, which has struggled to overcome technical and cost concerns in recent years. (Business Green)

Mylan may have overcharged taxpayers by $1.27 billion for EpiPen

U.S. taxpayers may have overpaid for Mylan NV’s EpiPen shot by as much as $1.27 billion over the last decade. According to a U.S. government report Mylan, by classifying EpiPen as a generic drug rather than a brand-name product, has short-changed the Medicaid program for the poor. Under Medicaid, makers of brand-name drugs must provide deep discounts on their products. In October, Mylan said it reached a settlement with the U.S. to pay $465 million for misclassifying the drug as a generic product, which doesn’t require the same discounts. This is not the first time that Mylan has come under fire. After acquiring the rights to sell EpiPen in 2007, the company raised the price by about sixfold before coming under scrutiny last year for charging $600 for a two-pack of the life-saving medication. Mylan has since launched a generic version of EpiPen at a lower price in an effort to quell the controversy. (Bloomberg)

This month AustralianSuper, Australia’s largest pension fund which manages A$110bn (US$82bn) in assets, has begun voting against the re-election of directors at companies without any female representation on their boards. The fund has already voted against the re-election of two male chairmen at Galaxy Resources and Cimic Group.  Last year the fund wrote to 17 ASX-listed companies with all-male directors warning they could face similar action unless they appointed a woman to the board.  The push on gender diversity is part of a wider focus on ESG criteria by Australia’s superannuation industry. Gender diversity has moved up the political agenda in Australia over recent years and in 2015 the Australian Institute of Company Directors (AICD) set a voluntary target of achieving 30 per cent board representation for women by the end of 2018. The target and increasing pressure by pension fund shareholders have been factors in prompting female board representation to climb from 21.7 per cent in 2015 to 25.3 per cent in 2016 — the highest in Asia Pacific. (Financial Times)*

Black, Asian and minority ethnic (BAME) workers are much more likely than white workers to be in insecure jobs such as zero-hours contracts, according to the Trades Union Congress. The TUC is urging policymakers and employers to tackle bias and racism in the workplace after its research found one in every 13 BAME workers is in temporary or zero-hours work, compared with one in 20 white workers. Black workers in particular faced insecurity at work, and were more than twice as likely as white workers to be in temporary and zero-hours. Between 2011 and 2016 the number of black workers on temporary contracts jumped 58% – more than seven times the 8% increase for white workers. The TUC is calling on the next government to ban mandatory zero-hours contracts and for rules that force employers to publish ethnic monitoring reports on recruitment, pay and employment type. (Guardian)