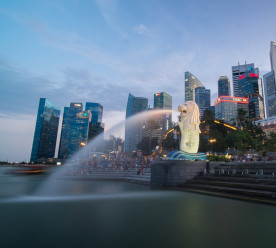 City Developments Limited (CDL), the Singaporean property giant has issued a S$100 million green bond, the country’s first. Other Asian countries have so far dominated the region’s green bond market, capital that is used to finance projects that have positive environmental and climate benefits. CDL stated that the bond will be used to make sustainability upgrades to the CDL headquarters, the Republic Plaza. Environmental and efficiency upgrades that the building has already undergone have earned it the highest possible rating in Singapore’s national green building certification scheme and also saved the company S$1.2million savings every year. CDL said that it hopes to pave the way for other Singapore firms to finance more sustainability ventures. “CDL’s inaugural green bond links our sustainability initiatives with the capital markets…it also complements the Singapore government’s target of greening at least 80 per cent of the country’s building stock by 2030”.  (Eco-Business)

The high-profile Mission 2020 campaign led by Christiana Figueres launched yesterday, April 10th, with a goal to encourage urgent climate action to ramp up emissions cuts in the next three years. Mission 2020 identifies the end of the decade as a “climate turning point” where the world must start bending the emissions curve downwards and realise steep year-on-year emissions reductions in order to hold global temperatures stable. Mission 2020 has set six targets for the end of the decade that will act as indicators to judge whether the world is set to deliver deep emissions cuts, including ensuring renewables outcompete fossil fuels as new electricity sources worldwide and that zero-emission transport is the “preferred form” of all new mobility in world cities and transport routes. Figueres said “we have a collective responsibility to raise ambition, scale-up our actions and move forward faster together to safeguard the sustainable development goals and protect the inalienable right to life of our and future generations.” (Business Green)

Wells Fargo has clawed back $75m in bonuses after it was uncovered that top executives were aware of staff abuse years before it was disclosed.  A six month internal investigation found that former managers including the former chief executive, John Stumpf, set “untenable” targets and ignored signs of misconduct for up to 15 years.  An in-principle settlement of $110m has already been reached last month to compensate aggrieved customers for abuses back dating to 2009. These new findings may lead to pressure on Wells Fargo to compensate more victims. The inquiry that Mr Stumpf was aware of an “incident” in Colorado in 2002 when internal investigators found “almost an entire branch” had engaged in a form of “gaming”. Some employees had issued debit cards to customers without their consent. Of the newly announced $75m in clawbacks, $28m in bonuses will be taken from Mr Stumpf. The total amount of pay taken from executives through clawbacks and other measures is among the largest in corporate history. (Financial Times)*

Shell admits to dealing with a convicted money-launderer

Oil giant, Shell has, for the first time, admitted to dealing with a convicted money-launderer. A publication of emails by Global Witness and Finance Uncovered, showed that Shell negotiated with Dan Etete who was later convicted of money laundering in a separate case. In order to gain access to an oil field in Nigeria, Shell paid the Nigerian government $1.3billion. Investigators have uncovered that $1.1billion was passed from the Nigerian government to a firm controlled by Mr Etete. Originally, Shell claimed to only have paid money to the government; however a spokesman has now said the Shell has engaged with Etete before signing the deal. The spokesman stated that the company decided to engage with Etete in order to “resolve the impasse”. He went on to add, “We believe that the settlement was a fully legal transaction with the FGN (Federal Government of Nigeria’s).” (BBC)

Last week the Ford Foundation announced it will invest as much as $1 billion out of its $12 billion endowment to accelerate mission-related investing (MRI) over the next decade. The 80-year-old foundation — which over the years provided seed funding for countless initiatives, from law school clinics to microfinance in Bangladesh — believes this move will spur institutional investors and other foundations to devote more resources to impact investing.  As a result of existing American tax law, foundations generally invest most of their endowments in order to reap dividends or bank interest to bankroll its costs, as well as pay-out funds for grants. For the Ford Foundation to commit a sizable percent of its actual endowment to mission-related investing demonstrates how bullish the organization is when it comes to the growth of social enterprise. Darren Walker, president of the Ford Foundation, said in a recent blog post “we must begin to more deliberately leverage the power of our endowment.” (Triple Pundit)