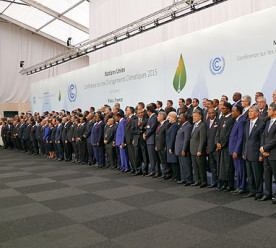 US and China agree to ratify Paris climate deal

The US and China, the world’s biggest emitters of greenhouse gases, have announced they will formally ratify the Paris climate change agreement. The Paris agreement, which commits countries to aspire to keep temperatures below 1.5°C above pre-industrial levels, must be ratified by 55 countries, representing 55% of global emissions, in order to come into force. The US and China, the world’s top two emitters, are together responsible for about 38% of emissions. “We have a saying in America that you need to put your money where your mouth is,” US President, Barack Obama said. “And when it comes to combating climate change that is what we are doing … we are leading by example.” (The Guardian)

Some of the world’s largest food and agriculture companies, including PepsiCo, Walmart, General Mills, Cargill and Kellogg’s, have partnered with conservation organisations to support farmers in the improvement of soil health and water quality. Named the Midwest Row Crop Collaborative, the collective aims to enhance the use of environmentally preferable agricultural practices in Illinois, Iowa, and Nebraska. The Collaborative plans to initially focus on optimizing soil health practices having committed to raising $4 million over four years to help accelerate the Soil Health Partnership, a farmer-led initiative to encourage practice that improve soil quality. Other aims of the Collaborative include reducing nutrient runoff into the rivers and streams of the Mississippi River Basin, maximising water conservation and reducing greenhouse gas emissions. (3BL Media)

A lawsuit has been filed against major Thai food exporter Betagro Group over allegations of forced labour on a chicken farm. With the help of the Migrant Worker Rights Network, fourteen migrant workers are demanding US$1.3 million in compensation for being overworked and underpaid on a Thai chicken farm that had supplied meat to Betagro. The company cut ties with the supplier farm after the workers’ allegations first surfaced in June. The labourers said they were forced to work 20 hour days and forced to sleep in chicken rearing areas on the farm. Thailand’s seafood sector has long been scrutinised for using trafficked labour and subjecting workers to poor conditions, but the poultry industry, which exports around a third of its meat to Europe, has largely evaded scrutiny. (Channel NewsAsia)

Analysis from professional services firm Deloitte has found that bonus payments for directors of the UK’s largest firms increased in 2015. This is despite new regulations that have increased disclosure and introduced binding votes on board pay in attempt to limit executive payouts amongst FTSE 100 firms. The research revealed that the median payout rose to 77% of the maximum possible, from 73% in 2014. Only four companies paid no bonus to executive directors, while seven companies paid the maximum amount possible. The news comes in the same week as UK Prime Minister, Theresa May, announced at the G20 summit she plans to bring forward proposals to tackle bad corporate behaviour such as excessive executive pay. (The Guardian)

The UK government has announced plans to ban microbeads used in cosmetics and cleaning products by 2017. The small pieces of plastic commonly found in toothpaste, exfoliating body scrubs and other household products have been the subject of environmental concern. Greenpeace had urged a UK ban on microbeads and a petition signed by more than 300,000 people asking for a UK ban was delivered to the prime minister in June. Responding to this call, Environment Secretary Andrea Leadsom has announced a consultation on how a ban would work scheduled for later this year. The development follows a US ban on microbeads that was passed at the end of 2015. (BBC News)