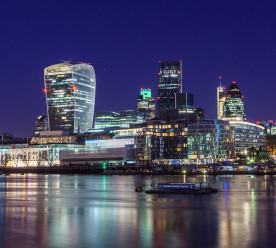 The City of London’s business leaders have responded with shock and horror to news of the vote for the UK to leave the European Union. “We are going to pay a high price for the breakdown of trust in the establishment … Emotion has trumped facts and untruths have been believed,” said Sir Mike Rake, chairman of BT. The European Round Table of Industrialists, which groups together 51 chairmen and chief executives of leading multinationals including BP and Rolls-Royce in the UK, said it was “disappointed” at the result. Ruby McGregor-Smith, chief executive of Mitie, was among those to highlight the wealth gap as a driver of the vote, while Alison Carnwath, chairman of Land Securities, and Lady Barbara Judge, chairman of the Institute of Directors, worried the result would aid the electoral chances of Donald Trump in the US. Alongside the outpourings of anger and dismay, figures such as John McFarlane, chairman of Barclays, and Sir Roger Carr, chairman of BAE Systems, have appealed for the City and the broader business community to engage with government to aid negotiations with the EU. (Financial Times 1; 2)

The Brexit result has been met with shock and disappointment by members of the green economy, many of whom have spent months campaigning for the UK to remain a member of the trading bloc. Green groups argue that the trading bloc has played a crucial role in delivering key environmental and wildlife protections, and raising international ambition to tackle climate change. The UK now faces the prospect of unpicking decades of environmental legislation as it untangles itself from Brussels. Policy officials will now need to start drawing up a national climate plan for submission to the UN, as the UK’s original submission to last year’s Paris Conference was made under the EU umbrella. The prolonged uncertainty could cause a hiatus in renewable investment in the UK from large European firms. (Business Green)

President Obama has signed a bill into law that places stronger regulations on chemicals present in nearly every product Americans use, including detergents, clothing, paint thinners, cleansers and automobiles. It updates the Toxic Substances Control Act, which had not been reauthorised since the mid-1970s. The new law gives the Environmental Protection Agency (EPA) more oversight and stronger tools to monitor chemicals that in some cases could cause cancer and other health problems in adults and children. Congress passed the legislation after decades of criticism from environmental groups that called on lawmakers to fix what they called “one of the worst environmental laws on the books.” EPA Administrator Gina McCarthy said the TSCA was well meant when it was originally passed but “without major changes to the law, EPA couldn’t take the actions necessary to protect people from toxic chemicals.” (Washington Post)

87 percent of CEOs say the UN Sustainable Development Goals (SDGs) represent an essential opportunity to rethink approaches to sustainability, and nearly half (49 percent) say businesses will be the most important actor in their delivery, according to a new study by the UN Global Compact and Accenture. The survey was launched at the UN Global Compact Leaders Summit 2016, where more than 600 business leaders from 75 countries have joined with civil society and government representatives to advance private sector actions for the achievement of the SDGs. “To meet the SDGs by 2030, the time to act is now. Many companies are already starting to look through the SDG lens – imagining how their operations, products and services can support the realities of our planet and better serve markets both today and in the future,” said Lise Kingo, Executive Director of the UN Global Compact. (Accenture; UN Global Compact)

Facebook employees will be trained to deal with their political biases, Chief Operating Officer Sheryl Sandberg has announced. The decision comes after allegations that Facebook editors systematically downplayed news stories and sources popular to conservatives. These claims led to a meeting between Mark Zuckerberg and leading conservatives, with Zuckerberg emphasising how important conservative and Republicans were to Facebook. “We think a lot about diversity at Facebook. We have a managing-bias class that all of our leaders and a lot of our employees have taken that I was part of helping to create, and we’ve focused on racial bias, age bias, gender bias, national bias, and we’re going to add in a scenario now on political bias,” Sandberg said. (Daily Dot)