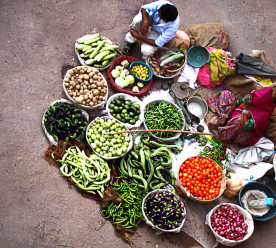 Report: More than half a million could die as climate change impacts diet

Climate change could kill more than 500,000 people a year globally by 2050 by making their diets less healthy, according to new research published in the Lancet. The research is the first to assess how the impacts of global warming could affect the quality of the diets available to people, and found fewer fruit and vegetables would be available as a result of climatic changes. Severe climate change would cut the fruit and vegetables available to people in 2050 by 4 percent, the calories available by 3 percent and the red and processed meat by 0.7 percent. “Year-to-year variability of food production will become greater, which will make global food markets more unpredictable,” said Prof Andy Challinor, at the University of Leeds. “And extreme climatic events will become more common, such as the wheat harvest failure in Russia in 2010 which affected UK food prices.” (Guardian)

Twitter to train prosecutors in fight against online abuse

Twitter is to train prosecutors in England and Wales to better fight online abuse, as the internet is increasingly used as a weapon by perpetrators of domestic abuse, rape and sexual violence against women. The Crown Prosecution Service (CPS) said the US-based social network would help it contend with criminal activity. “Social media is increasingly being used as a tool against women and I think it is really positive that Twitter is going to be training our lawyers in the months ahead,” said Jenny Hopkins, chief crown prosecutor and the CPS lead on violence against women. Nick Pickles, Twitter’s head of UK public policy, said he hoped that by working with the CPS to give prosecutors an in-depth understanding of the social network and the rapid development of digital communication platforms, UK citizens would be better protected. (Guardian)

Shell sued in two claims over oil spills in Nigeria

Tens of thousands of fishermen and farmers have been given permission to sue the energy giant Shell in a British court for oil spills in two further areas of the Niger delta. The action brought by London lawyers Leigh Day on behalf of the Ogale and Bille communities alleges that decades of uncleaned oil spills have polluted fishing waters and contaminated farming land. Last year Leigh Day won $83.5 million in damages from Shell at the high court in London for the Bodo community, who live elsewhere in the Niger delta. Shell said it would challenge the jurisdiction of the British court: “Asking the English court to intervene … is a direct challenge to the internal political acts and decisions of the Nigerian state.” Human rights activists argue that such pollution levels would never be tolerated in the home countries of such multinationals. (The Guardian)

Report: Energy storage could save billions

Energy storage has the potential to save £2.4 billion a year by 2030 according to a new report from the Carbon Trust and Imperial College London. The analysis finds that the UK could save billions by 2030 “if market arrangements for the electricity system allow for the use of energy storage.” If half of this saving were passed on to domestic consumers, average electricity bills could fall by around £50 a year. The International Energy Agency describes energy storage as having potential in terms of helping the planet “achieving a low-carbon future.” Storage is seen as crucial in transitioning to a low carbon, renewable future, because sources such as the sun and wind do not promise a constant stream of power. “But storage turns conventional knowledge on its head as it doesn’t fit neatly into existing regulatory frameworks, which have been designed around an energy system where power is supplied to consumers from large centralized power stations,” said Andrew Lever, director of innovation at the Carbon Trust. (CNBC)

GE to phase out fluorescent bulbs

The industrial giant General Electric has announced an end to the compact fluorescent lightbulb (CFL). The company said that it would stop making and selling the bulbs in the United States by the end of the year. “Now is the right time to transition from CFL to LED,” said John Strainic, chief operating officer of consumer and conventional lighting at GE Lighting. “There are so many choices that a consumer has for one socket in their home that it’s overwhelming. This will help simplify that.” Compact fluorescents were the first big energy-saving alternative to standard incandescents, which no longer meet government standards for energy efficiency in the United States and many places abroad. Customers have been migrating toward LEDs as their prices have dropped significantly. (New York Times)