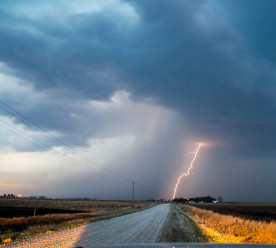 A UN report by the World Meteorological Organization (WMO) says rapid improvement is needed of early-warning systems for extreme weather events. The study warns one in three people on Earth are not adequately covered by warning systems and the numbers of people in need after natural disasters could increase by 50% by 2030. Thanks in part to climate change, over the past 50 years, some 11,000 disasters involving weather, climate and water-related hazards have occurred claiming two million lives and causing more than $3.5 trillion economic losses. Around 70% of connected deaths occurred in the poorest nations. Yet, according to WMO, just 26% of weather observation networks in Africa meet their standards. Good quality warning systems are critically needed in the least developed countries and in small island states. (BBC)

HSBC has committed to achieving net-zero financed emissions, announcing it intends to align its portfolio of investments and debt financing with global climate targets by 2050. The bank, currently Europe’s second largest financier of fossil fuels, has committed to reaching net-zero across its supply chain and operations by 2030, before reaching net-zero across its customer portfolio by 2050. The pledge does not include any firm commitments to phasing out support of fossil fuel companies. Instead, it focuses on the bank’s plans to invest between $75 billion and $1 trillion over the next 10 years to support its customers’ transition towards net zero emissions. The news has been criticised by some environmental campaigners due to lacking a phaseout timeline for its support of fossil-fuel companies and businesses responsible for deforestation. (GreenBiz)

Exploited workers in UK garment factories have been “robbed” of £27m in systematic underpayments since July, according to trade body the British Retail Consortium (BRC) and MP Lisa Cameron, who chairs a cross-party group of MPs on textiles and fashion. Around 10,000 garment workers are paid £3.50 an hour, compared with the national minimum wage of £8.72, meaning workers had missed out on £2.1m a week – or £27m in total – since retailers, MPs and NGOs last wrote to the Home Office in July calling for better protection for textiles employees. The trade body has urged the government to set up a “fit-to-trade” licensing scheme that would better protect workers against forced labour and other mistreatment, as well as ensuring payment of VAT, national insurance and holiday pay, among other entitlements. (Guardian)

Majority of UK diners are willing to switch to sustainable dishes

Concern about the environment among British diners has grown since the pandemic began, according to the Sustainable Restaurant Association (SRA). Its poll found 65% of diners are concerned about the environment, an increase from 47% recorded before lockdown measures were introduced. The study also revealed that over 75% of consumers said they would either consider, be likely, or be very likely to order a dish that had ingredients that might otherwise be wasted. The SRA has calculated that the equivalent of the lifetime carbon footprint of more than 150,000 people could be saved if half the people who said they would be willing to switch to a more sustainable dish did so once normal dining patterns resume. (Business Green)