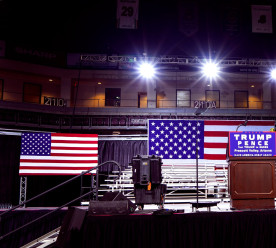 During last night’s US Vice Presidential debate, current Vice President Mike Pence disagreed with Democratic vice presidential nominee Senator Kamala Harris’ assessment that the climate crisis poses an existential threat. Pence, who has long denied climate science, dodged saying climate change was man-made or a threat to the planet, merely stating more than once he would “follow the science”. Pence went further to state the Green New Deal would “crush American energy” and destroy traditional fossil fuel jobs. Harris, meanwhile, called climate change an “existential threat” to the globe but is widely acknowledged to have softened her stance to avoid alienating voters in key states. She said Biden does not support the progressive Green New Deal but highlighted his proposed stimulus package, which would drive hundreds of billions of dollars into clean energy jobs. (CNN, BBC)

Prince William and Sir David Attenborough have joined forces to launch what they hope will become the “Nobel Prize for environmentalism”. With £50m to be awarded over a decade, the Earthshot Prize is the biggest environmental prize ever to be launched. The Prize will make five awards of £1m each year until 2030 to support the best and most innovative ideas that help: ‘protect and restore nature, clean our air, revive our oceans, build a waste-free world, and fix our climate’. Individuals, community groups, scientists, activists, economists, leaders, government, banks, businesses, cities and even countries are able to submit their ideas. A coalition of individuals, businesses and organisations have provided the money for the prize and will help maximise the impact of the winners’ ideas. (BBC)

Growing use of nitrogen-based fertilisers for food production is increasing emissions of nitrous oxide (N2O), which, if left uncurbed, could cause global average temperatures to rise well above 3°C higher than pre-industrial levels. According to scientists in the journal Nature, the agriculture sector was the biggest contributor to the rise in N2O emissions, which threatens efforts to curb global warming. The largest regional contributors to global N2O emissions are East Asia, South Asia, Africa and South America, with Brazil, China and India seeing highest growth, the study said. N2O is a main man-made substance damaging the planet’s protective ozone layer, and its level in the atmosphere has risen 20% since 1750, while emissions have increased by 30% over the past four decades due to human activities. (Thomson Reuters Foundation)

Plans to open the world’s largest insect farm in 2022 have taken a major step forward, after ag-tech start-up Ÿnsect secured $372m investment in its latest fundraising round to help build the ‘carbon negative’ project in France. The vertical farm facility is designed to cultivate mealworm to provide an alternative, lower carbon protein source replacement for animal proteins in the supply chains of fish and livestock farms, as well as for pet food and plant nutrition. If adopted widely, it argues insect-based pet food could make a major dent in carbon emissions: one 2017 US study of pet cats and dogs suggested their diet constitutes about a quarter of the environment impacts from animal production in terms of land, water, and fossil fuel use. (Business Green)

The Forestry Corporation of New South Wales could face more than $1m in fines for the alleged illegal logging of trees in protected areas, including koala habitat, in the state’s north. The New South Wales Environment Protection Authority (EPA) has charged the Forestry Corporation for alleged illegal felling of trees in exclusion zones and protected areas in the Wild Cattle Creek state forest in 2018. It is facing two charges for logging zones considered “high use” habitat for koalas, with each offence carrying a maximum fine of $440,000. The authority also alleges that the forestry agency logged protected rainforest and cleared trees inside an exclusion zone surrounding warm temperate rainforest. (Guardian)