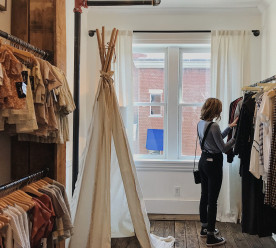 High-end department store chain, Selfridges, has opened a new business stream, offering customers the opportunity to rent fashion items instead of paying to own. Collaborating with online fashion rental platform, HURR Collective, Selfridges’ exploration into the clothing-as-a-service model will allow customers to hire 100 items from more than 40 fashion brands for up to 20 days at a time. This new rental business stream complements the company’s other efforts on circularity, such as its reselling service named Resellfridges, whereby customers can buy and sell pre-owned fashion items. The initiatives, which Selfridges currently refers to as “experiments” in the circular business space, form a key part of the company’s recently announced Project Earth strategy. The resell and rental services being introduced are, according to the company, explicitly to “inspire a shift in mindsets” as it works towards its ambition of achieving net-zero carbon by 2050.

The move by Selfridges is just the latest in a number of initiatives within fashion, which see circular business models being implemented. European fashion platform, Zalando, is launching its pre-owned fashion range later this year, and denim brand Levi’s has collaborated with Dutch fashion brand GANNI to create a new clothing rental service. Before these big names got in on the act, a number of emanant start-ups had been paving the way, such as ThredUP, The RealReal and Rent the Runway. These circular models attempt to rid the industry of the take-make-dispose status quo that causes the industry, according to some estimates, to be responsible for as much as up to 10% of annual global carbon emissions. And it seems that subscription-based models are a good fit for the industry. In fact, examples of successful subscription-based models introduced overtly on the grounds of sustainability, are hard to come by, outside the fashion industry.

One hurdle to overcome for these ventures to continue, is the impact of Covid-19. Prior to Covid, the market for clothing-as-a-service was anticipated to double in size by 2025. However, renting clothes means, in effect, sharing them – and in an age in which we’re only tentatively touching elbows, that may prove to be a psychological challenge for customers. Time will tell on that front, but in the meantime, industries should learn from the real pioneers of the sustainability-driven subscription economy in fashion, and hope that the “experiments” prove successful.