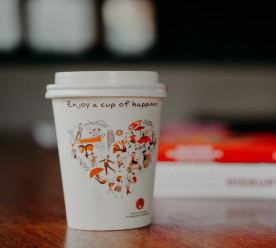 The UK’s Pret a Manger, with 398 high street food retail outlets, is to offer customers up to five coffees a day if they sign up to a monthly subscription service. The chain is hoping that the price tag of £20 is low enough to win back some of the business lost in the pandemic, as city centres remain relatively deserted with office workers continuing to work from home. Pret has already announced it is closing 30 outlets and laying off a third of its staff. Just days after Pret revealed this deal, competitor Leon launched its own “unlimited” coffee offer, where customers will get up to 75 coffees for a 30-day period for a one-off payment of £15.

Pret boss, Pano Christou, told the BBC’s Today programme, “There’s no doubt that workers will come into the office less often than before. Pret needs to adapt itself to the changes of customer patterns, and that’s where we’ve been very focused.” He added that Pret had seen its delivery business grow tenfold during the coronavirus crisis.

In the sustainability world, subscription models have often been purported as a way in which businesses and individuals can reduce waste and save resources, particularly within sectors such as clothing retailers. With excessive amounts of coffee as their weapons, Pret and Leon have deployed a subscription model that bears the entirely opposite effect. It is understandable why the approach has been taken. For two companies so reliant on passing trade from office-based workers, the onset of the work-from-home era has been lethal for their business. With survival at stake, and many thousands of jobs on the line, any new scheme to entice customers back, and in the process secure longer-term commitments from them to return, entirely makes sense.

However, considering the efforts both chains make on their sustainability credentials – offering vegan options, and compostable and recycled packaging – the potential environmental impact of the subscription-based models that have been introduced, should be considered. For one, the sustainability agenda’s version of subscription-based models has the intention of reducing consumption. In the desperate bid for customers, the “all-you-can-drink” offer from Leon clearly runs at odds with this notion. Compounding this, is that for all the talk of the impact of coffee cups – just one in 400 of which gets recycled – Covid-19 has forced companies to allow disposables only. Perhaps in light of recessions and job losses, these aren’t the biggest things to worry about. However, it does go to show that subscription-based models aren’t necessarily a sustainability holy grail.