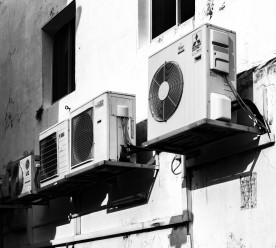 Air conditioning curbs could save years’ worth of emissions – study

Up to eight years’ worth of global greenhouse gas emissions could be prevented over the next four decades by setting tougher standards for air conditioning, according to a study by the UN and International Energy Agency (IEA). It found that improving the energy efficiency of cooling systems by using climate-friendly refrigerants could remove emissions equivalent to between 210 billion and 460 billion tonnes of carbon dioxide by 2060. Doubling the energy efficiency of air conditioning by 2050 would cut electricity use by 1,300 gigawatts, the equivalent of all the coal-fired power generation capacity in China and India in 2018, saving up to $2.9 trillion in electricity costs. More efficient air conditioning would have other benefits too, according to the report, such as better access to life-saving cooling equipment for medicines and vaccines, improved air quality and reduced food loss and waste. According to the report, an estimated 3.6 billion cooling appliances are in use worldwide, and this could rise to 14 billion by 2050. (The Guardian)

A third of the 1.45 million tonnes of electrical waste produced in the UK was either lost, thrown away, hoarded or stolen last year, costing the economy more than £370m, according to a study published by waste electronics and electricals non-profit Material Focus. The study reveals that just 915,000 tonnes of old electronics and electrical equipment – including phones, laptops, TVs and radios – were sent for reuse and recycling last year in the UK. That means around 500,000 tonnes of waste electrical and electronic equipment (WEEE) containing potentially valuable metals such as gold, copper, aluminium and steel were either going to waste or not being utilised, costing the UK economy hundreds of millions of pounds each year. The impact of surging demand for electricals and the failure to reuse or recycle old equipment and raw materials is not only costing the economy, but also generating around 2.8 million tonnes of CO2 emissions each year, roughly equating to the climate impact of roughly 1.3 million cars driving on the roads, the non-profit said. (BusinessGreen)

Australia’s environment is in an unsustainable state of decline and laws set up to protect unique species and habitats are ineffective, a major review of the national environmental framework has found. The interim report from the review of Australia’s Environment Protection and Biodiversity Conservation Act recommends sweeping changes, including the establishment of a set of legally enforceable national environmental standards that set clear rules for environmental protection while allowing for sustainable development. The review finds the government has not effectively managed threats to species, has stopped listing key threats and that coordinated plans to address major threats are “ad hoc” rather than a national priority. The report has uncovered widespread problems, including poor monitoring of endangered species, major delays in the listing of threatened species and ecosystems, failure to develop, update and implement recovery plans for species and habitats threatened with extinction, failure to list key threats to species, failure to protect important habitat, and threatened species funding being used for projects that do not benefit threatened species. (The Guardian)

The UK government has announced its latest wave of sustainable farming funding, awarding £24 million of support to nine projects working on everything from carbon capture technologies to fruit-picking robots. Led by Nottingham company Deep Branch Biotechnology, the project will use its unique technology to turn carbon dioxide captured at Drax’s Selby power station into animal food that can be produced with minimal water usage and without the need for arable farmland. Other projects receiving funding include the world’s first Autonomous Growing System (AGS), led by Optimal Labs in London, which will receive over £2 million to provide autonomous technology that controls climate, irrigation and lighting, enabling any crop variety to be grown in any location. Meanwhile a project led by Saga Robotics in Lincoln will receive nearly £2.5 million to perform the largest known global demonstration of robotics and autonomous technologies on a farm. The robots will assist farmers by carrying out essential, energy intensive physical farm processes such as picking and packing fruit and treating crops to reduce critical pests and diseases. (BusinessGreen)

A Philippine court has thrown out an appeal by a mining company seeking to continue operations despite its permit having expired last year. The decision by the Philippine Court of Appeals against OceanaGold Philippines Inc. (OGPI) marks the latest legal victory for the Indigenous community in the Didipio region, some 270 kilometers (170 miles) northeast of Manila, who for a quarter of a century have fought against the destruction of their environment. The agreement was covered under a mining permit known as a Financial and Technical Assistance Agreement (FTAA). Such agreements are valid for 25 years and OceanaGold’s mining permit expired under the Philippines’ Mining Act of 1995. The provincial government of Nueva Vizcaya issued a directive on the same day the FTAA expired, calling on locals to “restrain any operations” by OceanaGold. The appellate court also said no Philippine law grants OGPI any right to conduct mining operations after the end of its mining agreement or while in the process of applying to renew its mining permit. (Eco-Business)