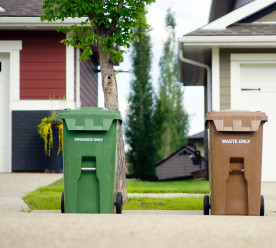 The effort to reduce Europe’s plastic waste could become a quarter of a billion dollars more expensive every year as the cost of recycled plastic soars, according to experts. In recent months, the price of recycled plastic flakes, used to make goods from soft drink bottles to glitter, has become more expensive than virgin plastic for the first time. For years the cost of making plastic products from recycled flakes was cheaper than relying on virgin plastics made using fossil fuels, meaning the sustainable option was an economic option too. A report from S&P Global Platts, a commodity market specialist, revealed that recycled plastic now costs an extra $72 (£57) a tonne compared with newly made plastic. According to the analysts this trend is driven in part by the growing demand to include recycled plastics in new products. Meanwhile, new plastic is becoming cheaper to make due to a flood of petrochemicals production from the US driven by the shale gas boom. (The Guardian)

Farmers around the world are losing up to 20% of the food they produce every year but action can be taken to reduce this, according to the United Nations on Monday as it quantified such losses for the first time. A combination of causes, ranging from harvesting and handling practices, to lack of infrastructure and market prices to pests, diseases and climatic conditions, contributed to these losses, said the UN Food and Agriculture Organization (FAO). An earlier figure estimated about a third of the world’s food – about 1.3 billion tonnes – was lost or wasted annually but that was a rough figure including estimates for losses along the whole supply chain. The latest numbers, which showed 14% losses globally, focused on losses between harvest and markets and showed variations among the world’s regions and commodities. (Thomas Reuters Foundation)

Top corporates embrace ESG and SDG reporting according to report

Leading corporates are providing investors with more information than ever before on their environmental, social, and governance (ESG) performance and their progress against the United Nations’ Sustainable Development Goals (SDGs). However, the rapid expansion in environmental reporting has led to growing calls for governments and regulators to standardise and simplify disclosure regimes. That is the over-arching conclusion from the seven edition of the Reporting Matters annual review from the World Business Council for Sustainable Development (WBCSD), which today provides an update on the sustainability reporting performance of almost 160 leading global companies across 34 countries. The report reveals that 88 percent of member companies used to benchmark progress have improved their overall reporting scores since the baseline year 2015, 38 percent have improved their materiality score and 86 percent prioritise specific SDGs and present some evidence of companies’ alignment with and contribution to the goals. (Business Green)

Renewable energy sources provided more electricity to UK homes and businesses than fossil fuels for the first time since the Industrial Revolution over the last quarter, according to new research. The renewables record was set in the third quarter of this year after its share of the electricity mix rose to 40 percent. It is the first time that electricity from British windfarms, solar panels and renewable biomass plants has surpassed fossil fuels since the UK’s first power plant fired up in 1882. A string of new offshore windfarms built this year helped nudge renewables past fossil fuels, which made up 39 percent of UK electricity, in a crucial tipping point in Britain’s energy transition. Energy and Clean Growth Minister Kwasi Kwarteng said the renewables record is “yet another milestone on our path towards ending our contribution to climate change altogether by 2050”. (edie)

Car manufacturer, Bentley Motors’ corporate headquarters and main manufacturing facility in Crewe has achieved carbon-neutral certification, with a solar-powered carport, green energy contracts and carbon offsets used to decarbonise the plant. The Crewe site’s carbon-neutral certification builds into the overall decarbonisation plan of Bentley Motors’ parent company Volkswagen (VW). As it strives to achieve zero-carbon status, VW will source more renewable energy for its manufacturing plants and showrooms, while implementing other low-carbon technologies across its value chain. It will then introduce an internal carbon price or carbon “tax”, with individual facilities and business departments charged for using non-renewable electricity or heat and for travelling using non-electric road vehicles or by passenger plane. Money raised in this way will be used to pay for external carbon credits, offsetting the carbon equivalent of emissions from these activities. (edie)