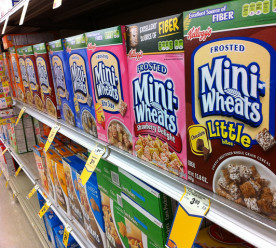 American healthy snack company, KIND Healthy Snacks (KIND), continues to expose prevalent use of sweeteners in today’s popular snack foods. In the latest component of its educational journey, KIND — which has long disclosed the sugar in its snacks and challenged other snack companies to reduce their sugar levels —unveiled an online database and an augmented reality installation in New York that showcase the multitude of different sweeteners and sugar sources hidden in top-selling snacks. As KIND points out in a statement, foods such as energy and snack bars, yoghurt, cereal and granola have long been perceived as healthy choices, but KIND has revealed that the sweetener content of many of these options are similar to that in desserts and frozen treats. For example, some energy bars are comprised of more than 30 percent sugar. The ‘Sweeteners Uncovered’ pop-up shop will use augmented-reality technology to highlight the total sugar content of some of North America’s favourite snacks, and also the obscure sweetener names that they are hiding behind. (Sustainable Brands)

US companies reveal pay gap between bosses and workers

The extent of pay gaps between CEO and median employee are emerging in US proxy filings for the first full year since the Securities and Exchange Commission mandated disclosure by American companies. According to corporate filings, the median employee at Berkshire Hathaway, an American multinational conglomerate holding company, earned around seven times less than its CEO, Warren Buffet.  Within automotive and energy company Tesla, Elon Musk was paid 40,668 times more than the median worker. The median chief executive pay ratio for 2018 was 254:1, according to an analysis released last week by Equilar, a compensation consultancy, up from 235:1 in 2017 when only two-thirds of the companies it tracks disclosed such figures. The ratio has attracted attention from labour unions, activists and politicians at the beginning of a 2020 election season in which several Democrats are campaigning on taming corporate excesses and reducing inequality. (Financial Times)*

Censorship of lesbian content on China’s popular microblog, Sina Weibo, has caused fears of a deepening suppression of gay users. On Friday, Weibo users discovered they were unable to access a popular lesbian online discussion group. The discovery set off a flurry of angry posts, pushing the term ‘les’ into Weibo’s top search terms, as users proclaimed “We are les” in a show of support for those protesting against the censorship. In April last year, a campaign launched by Weibo attempted to remove homosexual content, but the company reversed its decision after an outpouring of anger, threats of legal action and a flood of personal letters to the company from the LGBT community. Advocates say that for many LGBT Chinese, these online groups can play an important role in helping people understand and accept gender identities. Weibo did not immediately respond to a request for comment. The company told media platform NGOCN that the group “temporarily did not meet requirements”, due to a “large volume of information that broke regulations”. (Financial Times)*

The New York Times and American clothing retailer, Everlane, are working together to raise awareness about journalism’s essential role in understanding and combating climate change. For every ‘Climate Collection’ t-shirt sold on Everlane’s website, nine state school students will receive free access to NYTimes.com, for one year. Michael Preysman, Founder and CEO of Everlane, said “we are thrilled to partner with them [The Times] to launch The Climate Collection that helps spread the truth of climate change, so the next generation can have a planet for the future.” On Earth Day (22nd April) The Times will also air a new TV advert as part of its ‘Truth is Worth It’ brand campaign. David Rubin, chief marketing officer of The New York Times, said, “We hope this collection and our new TV spot help get the word out about the critical role independent, original journalism plays in reporting the truth about our changing climate.” (The New York Times)

Investor’s service, Moody’s, has acquired a majority stake in Vigeo Eiris, a global leader in Environmental, Social and Governance (ESG) research, data and assessments. The acquisition furthers Moody’s objective of promoting global standards for ESG for use by market participants. Vigeo Eiris offers specialized research and decision-making tools for sustainable and ethical investments, with products and capabilities based on ESG assessments and an extensive ESG database. The acquisition recognizes that ESG considerations are increasingly relevant to issuers, investors, counterparties and others as capital markets and other stakeholders seek clear and objective standards for understanding and measuring these factors. Myriam Durand, Global Head of Assessments at Moody’s Investors Service, said “Moody’s acquisition of a majority stake in Vigeo Eiris will contribute to the further development of leading ESG risk assessments, enabling the market to benefit from a global standard in assessing ESG considerations as part of their investment decisions.” President of Vigeo Eiris, Nicole Notat, reiterated this statement, saying “this acquisition reinforces the importance of ESG assessments to market participants.” (Business Wire)