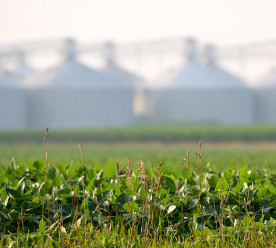 German based discount supermarket retailer Aldi will ensure all the soy in its supply chain will be sustainably sourced by 2025, it announced yesterday. Aldi said it will work to ensure the soy used in the animal feed in its meat and dairy supply chain comes from deforestation-free sources, initially by purchasing credits from schemes such as the Roundtable for Responsible Soy (RTRS), to fund sustainable production. Rising global demand for meat has increased demand for soy as a feedstock, leading to deforestation in many parts of South America. Some 90 percent of soy coming into the EU is used to feed livestock in the production of meat, poultry, dairy and eggs. Fritz Walleczek, managing director of corporate responsibility at Aldi UK, said forests around the world are under increasing pressure from agriculture. “Through working with our suppliers and industry stakeholders, we hope to help halt deforestation and protect these biodiversity-rich areas,” he said. (Business Green)

Britain’s greenhouse gas emissions fell 2.5 percent in 2018, dropping for a sixth straight year but more slowly than before, as record output of renewable power begins to replace coal-fired generation, government data showed on Thursday. Output of the heat-trapping gases in Europe’s second-largest emitter behind Germany fell to 449 million tonnes of carbon dioxide equivalent, the Department for Business, Energy and Industrial Strategy (BEIS) said in a preliminary report. Energy-sector emissions fell 7 percent as coal-fired power production dropped, amid record output from renewables such as wind and solar. Separate provisional data released by BEIS showed coal-fired power stations provided 5 percent of the country’s electricity generation in 2018, down from 6.7 percent a year earlier. The data showed emissions from transport fell 2.6 percent, which BEIS said was likely due to more efficient vehicles. However, emissions from the residential sector rose 2.8 percent, which BEIS attributed to an increase in gas for home heating. (Reuters)

Hundreds of large companies including Tesco, Walmart and Apple have not participated in a survey of labour practices backed by an influential group of more than 120 investors. Only 90 of 524 companies contacted by the Workforce Disclosure Initiative – which is backed by a coalition including Amundi, Legal & General Investment Management and UBS Asset Management – were judged to have disclosed the information requested on areas such as gender diversity and ensuring workers’ safety. “There are challenges to disclosing more workforce data,” said Amy Metcalfe, head of programmes at ShareAction, the responsible investment group that co-ordinated the survey. “But the leadership shown by 90 companies across 11 sectors demonstrates that these challenges can and should be overcome.” Investors are paying increasing attention to companies’ labour practices to try to mitigate risk and as part of a broader push for improvement. Investor support for the WDI has increased rapidly since its launch, growing to 122 groups managing $13.5 trillion. (Financial Times)*

The European Parliament has today agreed its position on the European Commission’s proposal for a sustainability “taxonomy” to help define standards relating to sustainable finance. The sustainability taxonomy will set the framework for establishing which economic activities substantially contribute to environmental objectives such as climate change mitigation. The next step is for the EU Council, the body for EU member states, to adopt its position, and then negotiations can begin. The proposal is one of the three legislative proposals in the Commission’s sustainable finance action plan, which is being implemented at a rapid pace. Sébastien Godinot, economist in the European policy office for campaign group WWF, said the taxonomy was a more “sensitive” topic. The campaign group had wanted a “fully-fledged” taxonomy ranking all economic activities by their environmental performance, and not just capturing what it referred to as “dark green” activities. (IPE)

One of the United States’ top LGBT+ charities removed Google from a gay and transgender rights ranking on Thursday for hosting an app that advises people on how to “recover” from same-sex attraction. Human Rights Campaign (HRC) suspended the tech company from its Corporate Equality Index, which ranks U.S. companies on the benefits they offer LGBT+ staff, over the Living Hope Ministries app. “We have been urging Google to remove this app because it is life-threatening to LGBTQ youth and also clearly violates the company’s own standards,” the HRC said in a statement. “Amazon, Apple and Microsoft have taken action to remove the app from their platforms, but so far Google has refused despite our warnings about the dangers.” HRC has ranked American companies since 2002 based on factors such as offering benefits equally to gay and straight staff and their partners and providing full medical insurance for transgender people. (Thomson Reuters Foundation News)